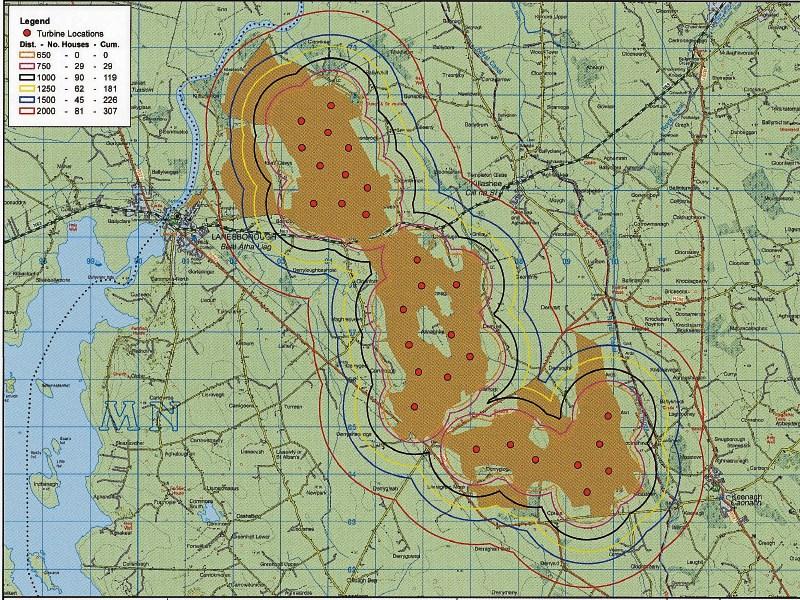 An opposition group to the Derryadd Wind Farm has been established as Bord na Móna unveiled the proposed turbine layout design at information sessions last week in Kenagh, Killashee, Lanesboro and Newtowncashel.

Wesley Jordan, spokesperson for the group, said they are eager to sit down with Bord na Móna to air their concerns over the development, which comprises 29 wind turbines.

“The setback distance from the turbines is working out to about 650 metres,” added Mr Jordan who also pointed out that the turbines would destroy the “peace and tranquility” of the area.

“We are country people and live in a quiet and peaceful part of the country; when this development begins, roads will be built and other infrastructure will be put in place and the whole area will be a hive of activity.”

Back in August, Longford District Court appointed a valuer in respect of the lands purchased by Bord na Móna under a compulsory Purchase Order (CPO) in the 1960s at Derryadd.

The move was part of  an effort by the company to push forward with its plans to develop the wind farm on the site.

Locals say that wind flicker and noise levels from the turbines will disturb the tranquility of the area and make life difficult for residents.

“These turbines will be 170 metres high and they are also going to need markers because they are so close to the Abbeyshrule Airfield,” Mr Jordan continued.   “They will be just 350 metres apart from each other.

“Bord na Móna say that the wind flicker, time-out and noise levels will not bother us, but we do not believe them.”

The Leader understands that the company will make its application to An Bord Pleanála for the development,  which is expected to begin in March or April 2017.

“What we want now is to sit down with Bord na Móna representatives and discuss our concerns,” said Mr Jordan.

“We would like to see the number of turbines reduced in the area.

“Also there are 307 households directly impacted by this development and we feel that they should be compensated.”