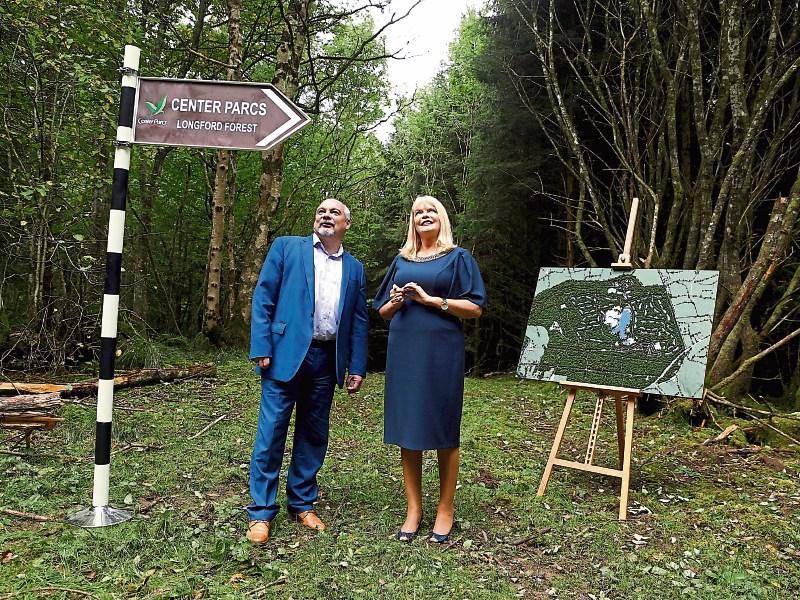 It was a day for celebration in Ballymahon last Monday when Center Parcs CEO Martin Dalby and Minister for Jobs & Enterprise Mary Mitchell O’Connor came to town.

The occasion was the Center Parcs Longford Forest development, which, those in the Goldsmith Room at the local library heard, will start in the Spring of 2017.

This has been met with much enthusiasm and as Cllr Paul Ross (FG) pointed out, it was the fast-tracking of the planning application by Longford Co Council that left the biggest impression on the Center Parcs team,

“One of the main impressions left here today was the fact that Center Parcs UK have never had a planning application come through the whole process so quickly,” added Cllr Ross.

“As a result of that, the development here in Ballymahon is ready to start now effectively - and that it very significant.”

A Community Forum is to be established by Center Parcs in Ballymahon towards the end of this year and those present at the library on Monday heard that this would ensure that all groups and associations in and around the south Longford town would be represented there.

“This,” added Mr Dalby “will be all about inclusion”.

Responding to the move, Cllr Ross said it was all very exciting as workshops to provide employment information will also be put in place at the same time as the Forum.

“Everyone asks about jobs so all of this will be addressed when that process is rolled out in November,” the local area representative continued, before pointing out that return and value for money from the project were key.

Meanwhile, Brexit and the news at the weekend that Britain would begin its exit from the EU as early as 2019 were also addressed in Ballymahon on Monday,

Many were curious as to whether or not there would be any implications for the UK development in Ballymahon as a direct result of the move.

“Absolutely not,” said Mr Dalby, before adding that Center Parcs had “absolutely no concerns” about Brexit with regard to the development of Longford Forest.

“People had concerns following the vote a few months ago by the UK to leave the EU, but Martin Dalby has made the assurances here today that it has left Center Parcs undeterred and they are intent on going ahead with this development here in Ballymahon,” he added.

“This project forms part of Center Parcs' Business Plan for the next few decades and even though the pound is weakening and will put pressure on some of the company’s projected costs, Center Parcs remains fully committed to the project here in Ballymahon.

“That is very, very reassuring.”

Minister for Jobs, Enterprise and Innovation Mary Mitchell O’Connor then assured the people of Co Longford that the 1,000 or so long-term sustainable jobs at Centre Parcs - once it is up and running - would be given to local people.

The event also heard that AIT had come on board and it would ensure that all the necessary skills would be provided through varying degrees of training programmes and appropriate courses.

“There will be 750  jobs during the construction phase with a further 1,000 sustainable jobs thereafter,” added the Minister.

“I have been around the town here today; people are genuinely delighted that this is coming to Ballymahon.

“This also ties in with the Government’s Rural & Regional Action Plan for Jobs.”

Finally there were also questions about the Gas pipeline and its extension to Longford.

Mr Dalby has made no bones about the fact that Longford Forest will have gas, but whether or not the rest of the county will benefit from this, still remains unclear.

The CEO said on Monday that he was due to have discussions with the relevant authorities in respect of the matter over the next couple of months, and  he would not be able to comment one way or another about the matter until those talks concluded.