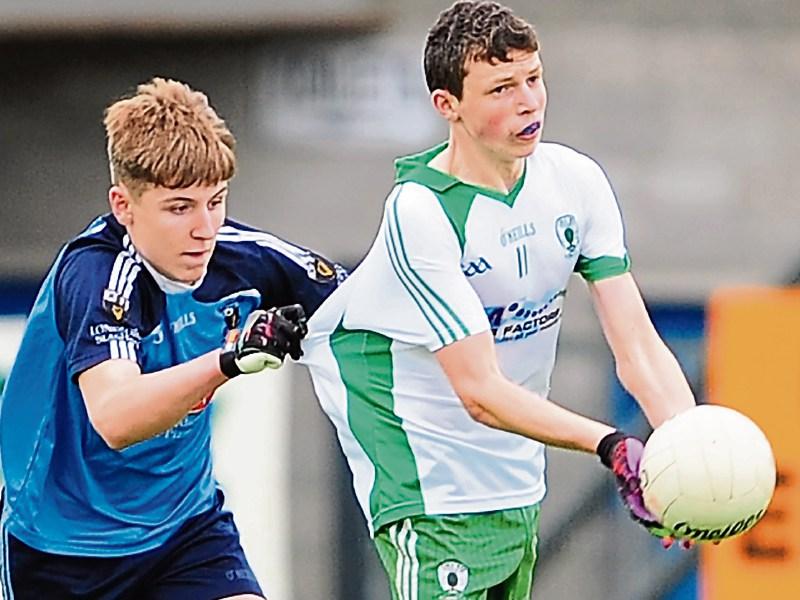 Killoe Og captured the Under 16 ‘A’ Football Championship title for the second year in succession when they scored a comprehensive victory over Longford Slashers in the final at Glennon Brothers Pearse Park on Saturday last.

It was a very accomplished all round team effort by the reigning champions who pulled right away in the second half to win by the wide margin of 11 points in the finish and they could even afford the luxury of kicking the same amount of wides on their way to a well deserved success.

It was a much tighter contest in the first half and just a solitary point was separating the sides before Jake Donnelly pounced to snatch an opportunist goal for Killoe in the second minute of stoppage time after a point attempt from the boot of Enda Bracken came back off the upright.

That proved to be a big blow for Slashers, who ended up trailing by 1-4 to 0-3 at the break with all their points coming from frees converted by corner-forward Diarmuid Sheahan.

Cian Dooner landed a couple of cracking points for Killoe in the first half with prominent midfielder Euan Finneran getting the opening score of the game in the 6th minute. Reece Leonard (free) was also on target for the title holders who were generally superior in most positions on the pitch.

Other fine displays from full-back Conor Gilna and wing back James Moran, along with Ronan Moffett at centrefield, laid the foundations for the eventual success and there was no stopping Killoe when they gradually clicked into top gear on the changeover.

A point apiece from Jake Donnelly and Cian Dooner (free) in the early stages of the second half extended the advantage before Darragh O’Connell raced through to fire over a fine score for Slashers in the 36th minute.

Killoe were then guilty of squandering a number of chances before they struck the killer blow when the lively Enda Bracken sent James Kennedy clean through for a great goal in the 44th minute.

There was no way back for Slashers at this stage and they suffered another setback moments later when reduced to 14 players after strong centre-half-back Daire O’Brien was sent-off after receiving a second yellow card.

Niall Finneran fired home a third goal for Killoe in the 48th minute and while there was some sort of consolation for Slashers when Jake Taylor flicked the ball to the net sixty seconds later, they then conceded a fourth goal in the 51st minute.

Substitute Eoin Smith weaved his way through in shooting to the net and almost immediately Niall Finneran got the final Killoe score when shooting over the bar.

Slashers battled it out to the bitter end and their perseverance was rewarded with two more points through Darragh O’Connell (54 mins) and Diarmuid Sheahan (60 mins).