Is this Longford's worst road? 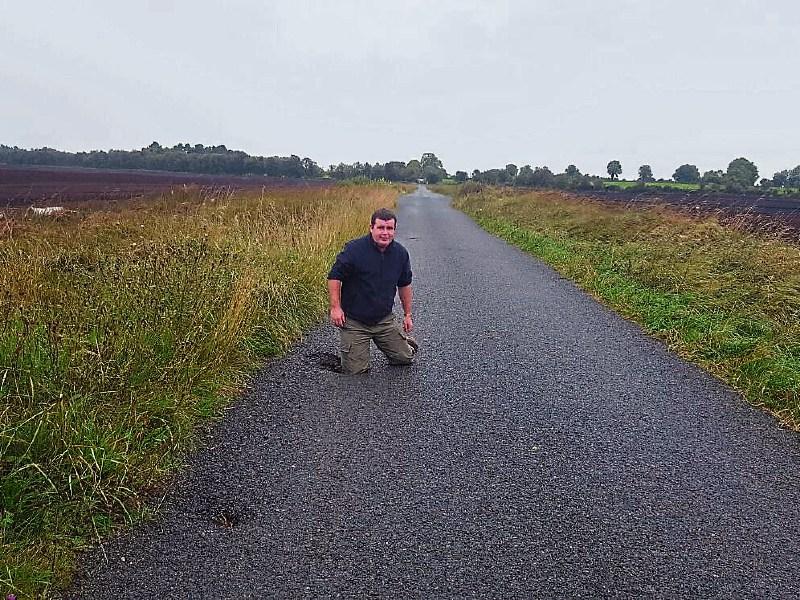 This is the huge pothole that is threatening to take over a rural roadway in south Longford.

Local resident Bernard Kenny showed the extent of the problem along the Askey road outside Newtowncashel last week in a picture which was obtained by the Leader.

Cllr Gerald Farrell, who submitted the photo, said the road at the locally named  Flanagan's Turn to Buggan Cross has been the bane of much distress for motorists and locals for some time.

“It's been like that for the last week or so,” said Cllr Farrell.

“The problem is it's lying across a bog road and is sinking into the ground.”

Cllr Farrell said the problem is so grave, council officials are now contemplating closing the road in order for essential repairs to be carried out.

“There is a fear that a section of that road could fall away completely,” remarked Cllr Farrell.

“To be honest though, closing the road is just what we don't want as it is used a lot by residents.

“Bord Na Móna have a depot on that road too and workers would use it on a regular basis.”

By way of a compromise, Cllr Farrell said the general consensus among local homeowners was for remedial work to be executed in an attempt to prevent any closure taking place.

Meanwhile, the Lanesboro publican has rounded on the large amounts of taxpayers' money that has been spent in drafting  flood risk management plans across the south Longford area.

In reference to ongoing fears surrounding a turlough at Cashelbeg/Fortwilliam along the Rathcline-Newtowncashel border, Cllr Farrell said the time had come for better use to be made of public monies.

“We all saw the rain that fell last weekend and residents down there are fearful that they could be marooned again,” he said.

“Local residents want to get a digger in to do some work and maybe look to see if a swallow hole could be opened up to see if there is anything causing an obstruction.

“I am annoyed  at the amount of money that has been p***** away on surveys, reports and consultations in this country. It's a complete joke.”