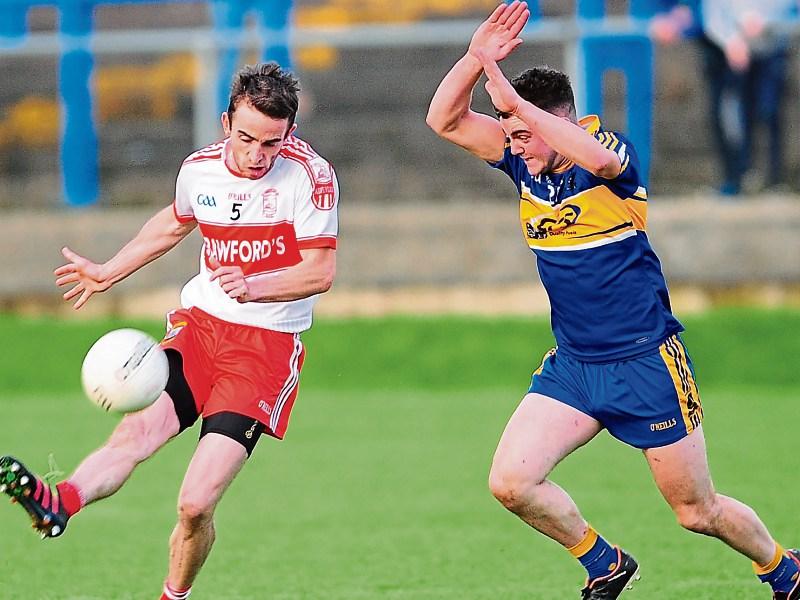 It may have been a very poor game but the manner of their extremely scrappy victory over Dromard in the Senior Football Championship semi-final at Glennon Brothers Pearse Park on Saturday evening last will matter little to Abbeylara who advance to meet Mullinalaghta in the decider on October 16th.

Thus the stage is set for a fascinating clash between the neighbouring rivals who are amalgamated at underage level in the guise of Northern Gaels and it remains to be seen where the coveted Connolly Cup will end up as the north Longford clubs - the runners-up in 2014 and 2015 - battle it out for the county title.

Abbeylara stuck rigidly to a defensive gameplan, breaking quickly on the counter-attack with Robbie Smyth inflicting the vast majority of the damage at the other end of the pitch in shooting the impressive total of six points - just one of which came from a free.

Just like the slender success over Clonguish in the quarter-final, the deadly accurate Smyth proved to be the matchwinner for Abbeylara but it would surely have been a different story but for the terrible finishing by Dromard during the course of this dismal encounter that developed into a dour struggle.

Missed chances cost Dromard dearly in their failure to reach the county final that they last graced back in 2013 and they were guilty of kicking no less than 17 wides which included at least six frees in pressing the self destruct button.

With the excellent Diarmuid Masterson dominating at midfield, and receiving great support from the prominent Peter Reynolds in the half-back-line, the Dromard attack were receiving a constant supply of the ball - particularly so in the first half - but were met with fierce resistance from a resolute Abbeylara defence who are such an effective tightly knit unit.

Last year’s beaten finalists (who kicked  8 wides) were content to soak up the pressure, with Colm P Smyth a key playmaker when they did venture forward, and it was left to Robbie Smyth to finish the job as he produced a masterclass in the art of score taking.

Robbie was the difference between the sides but if Abbeylara are to go on and win the senior championship title for the first time since 2006 then they will have to improve considerably to overcome St Columba’s in the eagerly awaited county final in the middle of next month.

Injuries to William Crawford and Russell Brady were setbacks for their shrewd manager Maurice O’Connor and there was a lengthy stoppage when Russell was grounded in a clash with Dromard substitute Jamsie Martin, the recipient of a black card for the offence in the 53rd minute.

Thus referee Derek Fahy elected to play 11 additional minutes (not entirely for the injury to Brady who was eventually stretchered off the pitch) but had the game  dragged on even longer Dromard would still be searching for the vital scores.

It was Abbeylara who made the better start and following a point apiece in quick succession from Jason Kelly and Robbie Smyth (a great strike), Colm P Smyth got through with the chance of a goal in the 8th minute but elected to pass instead and the ball was intercepted by a Dromard defender.

Cian Mimnagh opened the Dromard account when landing a very good point in the 10th minute but they failed to register another score in the first half as Abbeylara ended up leading by 0-3 to 0-1 at the break with their third score coming from Robbie Smyth in the 16th minute.

Dromard continued to waste chance after chance in what was dire stuff, to say the least, but they did make a bright start to the second half with another score from Cian Mimnagh.

Back came Abbeylara with a glorious point from overlapping defender Cian Brady five minutes into the second half and a score apiece were then exchanged between Francis McGee (‘45’) and Robbie Smyth before McGee converted a free for Dromard in the 47th minute to close the gap to the minimum of margins, 0-5 to 0-4.

With the advantage of the wind, Dromard appeared to be in with a strong chance of winning the game but a further brace of points from Robbie Smyth in the 51st and 53rd minutes swung the issue back in favour of Abbeylara.

Then came the injury to Russell Brady which held up the game for around six minutes and the next score did not materialise until the 7th minute of stoppage time when who else but Robbie Smyth fired over a free to leave his side in a comfortable 0-8 to 0-4 lead.

Moments later Francis McGee converted a free to give Dromard a glimmer of hope but they were unable to engineer a dramatic late equalising goal as Abbeylara finished the game with 14 players after Cormac Smyth received a black card right at the end.