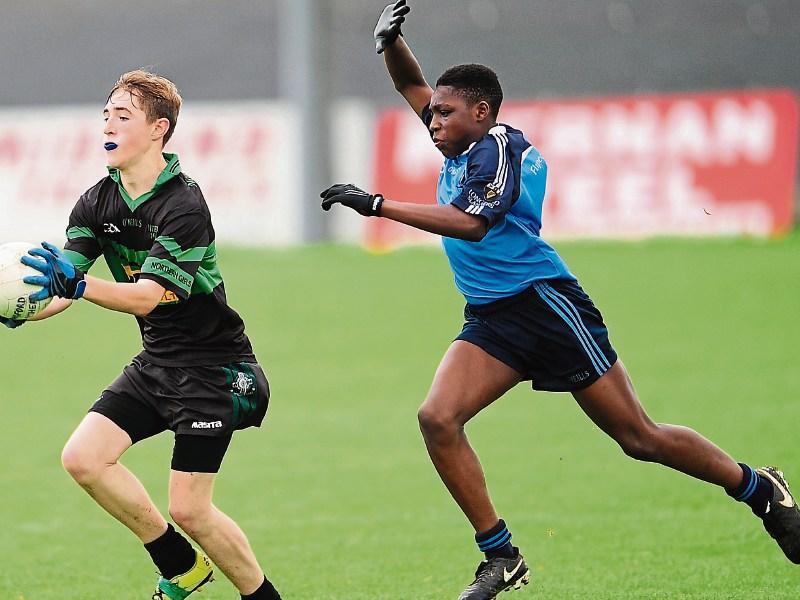 A point from Conor Leonard deep into stoppage time earned Northern Gaels a draw against Longford Slashers and a replay in this exciting Under 14 ‘A’ Football Championship Final at Glennon Brothers Pearse Park on Saturday last.

Slashers had been ahead by three points entering the final 10 minutes of the game but despite creating chances they failed to score in 16 minutes of play. Northern Gaels got themselves back into the game with points from Ciaran Scanlon (free), Caolan Lynch and Leonard.

All the goals were scored in an entertaining first half with some fantastic play from both sides. The opening score of the game was a goal from Slashers’ Miroslav Cureja in the 5th minute.

Northern Gaels opening score came in the 9th minute with a goal from Caolan Lynch which was fired past the helpless Stephen O’Brien in the Slashers goals. Minutes later Northern Gaels got a second goal when Cathal Gilligan finished the ball to the net.

The first point of the game came from Slashers corner-forward Dean Coughlan in the 12th minute and Ben Lynn followed up with a good effort to cut the gap to one point.

Northern Gaels points from Caolan Lynch and Ciaran Scanlon put a goal between the sides in the 16th minute. The game was level two minutes when the lively Ronan Sheahan lifted the ball over the head of opposing keeper Frank Sheehy to grab the second goal for Slashers.

Scanlon edged his side ahead again in the 19th minute with a neat point and he followed that with a free to put two between the sides in the 20th minute. That lead only lasted one minute as Slashers midfielder Davidson Olusanya gained possession and raced in before firing an unstoppable shot to the net.

Both sides could not add to their tally before the break and Slashers went in leading by the minimum of margins, 3-2 to 2-4.

A free from Ciaran Scanlon in the 33rd minute drew Northern Gaels level but then Slashers took control.

An excellent point from Ben Lynn put the sky-blues back in front again in the 36th minute and Mario Pirlog followed with a point before Donal Sheahan brought a very good save out of Gaels netminder Sheehy.

A point from Ronan Sheahan put three between the sides in the 47th minute and Slashers looked the likely winners at this stage but failed to register another score as the Northern Gaels defence upped their game. Slashers were also guilty of taking wrong options when they went in search of scores.

After going 17 minutes without a score Ciaran Scanlon pointed a free for Northern Gaels and  minutes later Caolan Lynch was on target to cut the gap to just one point.

Slashers wasted a chance in stoppage time, going for a goal instead of a point, and they were to rue that miss. Northern Gaels went down the field, were patient in the build-up as the ball was played to midfielder Conor Leonard and he made no mistake in shooting over the bar to earn his side a second chance.