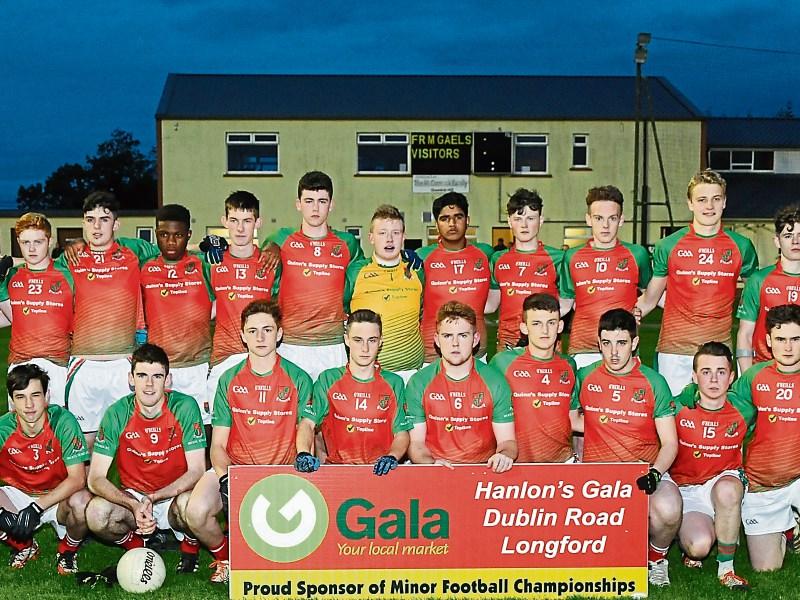 lonbroney/Wolfe Tones won the Minor ‘B’ title for the second successive year following a comprehensive victory over Granard/Ballymore in the final at the Monaduff grounds, Drumlish on Friday night last.

The sides had met twice already this year with Granard/Ballymore coming out on top on both occasions but it was third time lucky for the Sean Connolly’s/Mostrim amalgamation as they produced a tremendous performance to capture the Glenn Brady Cup.

From start to finish Clonbroney/Wolfe Tones were in control; they were first to nearly every ball, looked sharper and they were the hungrier side. It was a well deserved win against a Granard/Ballymore side that put in a below par performance.

When Daniel Connell got the first score just after the throw-in it set the tone of the game for Clonbroney/Wolfe Tones. They were eager to get scores on the board early on playing with a strong wind.

Thomas Doyle followed up by pointing two frees. Granard/Ballymore were back on level terms though by the 13th minute with a free from Jordan Martin, a wonderful point from Dillon Logan and then a free from Logan.

Another Doyle free edged Clonbroney/Wolfe Tones back in front again in the 15th minute. Granard/Ballymore had two chances to get scores but Jordan Martin’s effort was caught on the line and then Ciaran Reilly flashed his shot just wide.

Points were exchanged between Niall Campbell and Ben Martin before Clonbroney/Wolfe Tones edged further ahead approaching half-time; Thomas Doyle with two points (one free) to put his side 0-7 to 0-4 in front at the break.

Just like the first half, Clonbroney/Wolfe Tones started the second half well and registered another point inside the opening minute, Sean Kenny with the score, and Daire Duggan then stretched the lead to five points in the 35th minute.

A well-taken free from Jordan Martin and a nice point from Ciaran Reilly closed the gap to three but that was the closest Granard/Ballymore were to get to their opponents. In a decisive five minute spell Clonbroney/Wolfe Tones extended their lead to 11 points with goals from Ciaran Garry and substitute Matthew Garvey.

Rocked by the concession of those two goals, Granard/Ballymore tried hard to get back into the game. Dillon Logan hit over a free while Ciaran Reilly’s shot was deflected out for a ’45 before Ben Martin fired the ball over the bar from the 45 metre line.

Two frees from Jordan Martin left seven between the sides with nine minutes remaining but the Granard/Ballymore glimmer of hope was eventually dashed in the 54th minute when Joseph Gaffney got a killer third goal for Clonbroney/Wolfe Tones.

Shane Campbell fired over a point and Evan Murphy caught out the Granard/Ballymore keeper Mattie McCrann in the first minute of stoppage time when he scored the fourth goal for the superior Ballinalee/Edgeworthstown side.