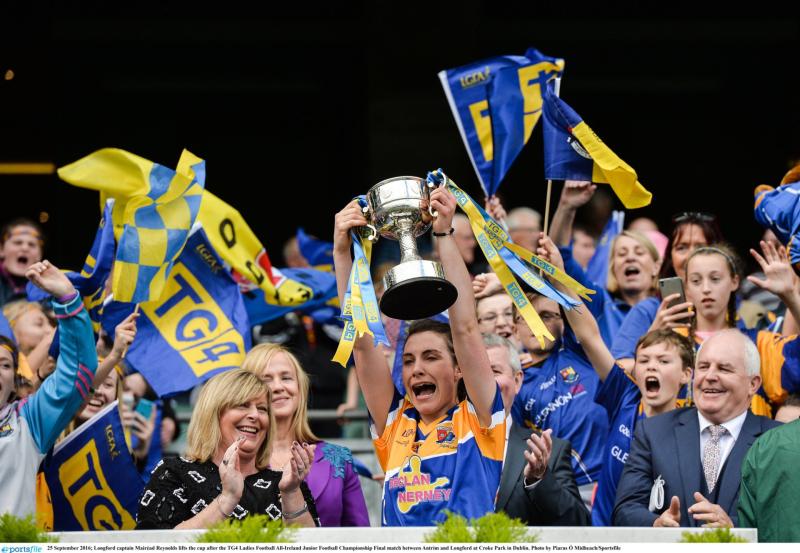 Trailing 0-2 to 1-8 after 23 minutes, Longford’s dream of getting their hands on the West County Cup they last held in 1997, looked in serious peril.

However, boosted by the introduction of subs Michelle Noonan, Aoife Darcy, Aisling Reynolds and Michelle Farrell, Longford transformed their fortunes dramatically and by the 45th minute Miceal Bohan’s charges were firmly in the ascendancy and leading by 3-10 to 1-8.

Longford scored a devastating 3-8 without reply inside 21 minutes and their superb performance, that was illuminated by character, heart and desire, gave delighted Longford supporters congregated in the Hogan Stand plenty to cheer about.

Mercurial midfielder Jacinta Brady, who was afterwards named as the TG4 Player of the Final, Emer Heaney and Aoife Darcy plundered for the all important goals that put Antrim firmly on the backfoot.

Antrim were stunned and just couldn’t get to grips with Longford. Their first point of the second half came in the 49th minute - ending a 26 minutes barren scoring spell.

However there was going to be no fairytale comeback from the girls from the Glens and when Aishling Greene grabbed Longford’s fourth goal in the 53rd minute, it was clear they weren’t going to be stopped in their bid to bridge 19 years since they were last All-Ireland Junior champions.

Antrim started the game well but kicked three wides in a row before they got their first score from Mairiosa McGourty in the fifth minute.

Longford replied with a point from Laura Burke but that was to be their only score for 14 minutes of play as Antrim took a hold of proceedings.

Frees from Eimear Gallagher and Claire Timoney was followed by a well taken goal from Timoney to put the Saffrons ahead by five; it was a poor goal for Longford to concede after they initially had a chance to get another score on the board.

Antrim were using the width of the pitch very well and with their forwards giving the Longford defence a torrid time they extended their lead to eight points in the 15th minute.

Longford got a much needed point in the 19th minute from Jacinta Brady. They made three changes with Michelle Noonan, Aoife Darcy and Aisling Reynolds coming on.

Antrim went nine ahead in the 23rd minute but Longford ended the half well. Darcy got a point in the 24th minute. Emer Heaney hit the crossbar minutes later but the loose ball was put over the bar by Aishling Greene. Aisling Reynolds got on the scoresheet to leave Longford trailing by six at the break; 1-8 to 0-5.

With the words of wisdom from 1997 captain and current selector Dara McGann ringing in their ears - "we waited this long - don't let it pass" - for the second half , the Longford girls put in a stunning performance.