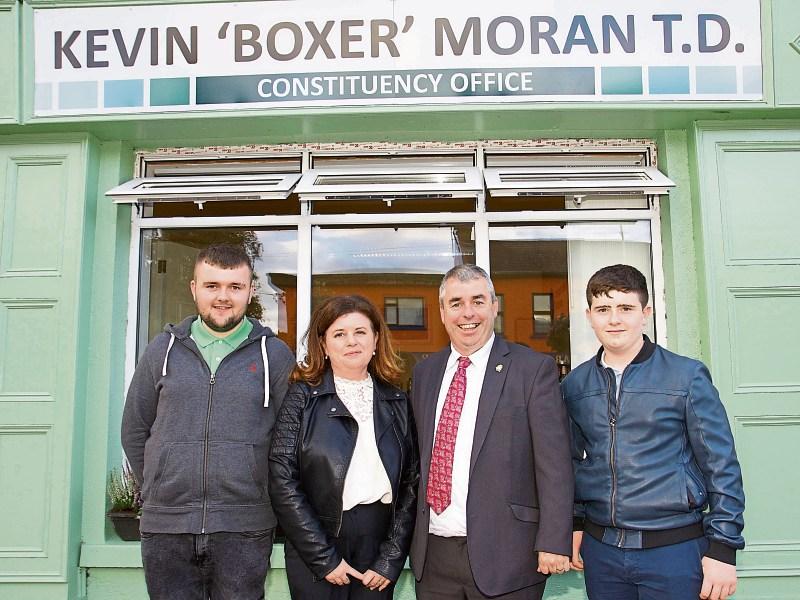 Funding for flood defence mechanisms in Newtowncashel and Lanesboro was announced by the Minister of State with responsibility for the Office of Public Works (OPW), Séan Canney on Friday in Ballymahon.

The Minister was attending the official opening of Deputy Kevin ‘Boxer’ Moran’s constituency office in the south Longford town when he made the announcement which will see €16,208 allocated for Tomasky; Forte William, €54,000; Tureen and Lismacmanus €21,600 and €18,800 for Killeen.

The money has been awarded to the local authority under a minor works scheme to alleviate flooding.

“This,” he added, “is good news for Longford and is just another example of how TDs working closely together with local authorities can get money for schemes”.

The Minister went on to say that Boxer and he had forged a working relationship that got “things done” since both took their seats after the General Election back in February.

“We both want to work as hard as possible to get as much done as we can for the people that we represent,” Minister Canney continued.

“This office is a valuable asset in Ballymahon and it is up to the people now to make the best use of it so that they can get things done for their area.”

Meanwhile, Deputy Moran told the people of Longford that they were to adopt him as their second son!

“I’m here to work hard for the people of Longford,” he announced.

“Some people say that Longford has been forgotten but we know that Center Parcs is coming and I believe that the whole region can work and develop around Center Parcs.

“This will be a huge tourist attraction and will provide many jobs that are needed in this region.”

Boxer said that he will ensure that “things happen” in Longford/Westmeath during his tenure as a TD and pointed out that he has been speaking to the National Roads Authority (NRA) with a view to upgrading the entire constituency’s road infrastructure.

“I chose Ballymahon for my office because we all must work together to get as much done as possible,” he said.

“Not everything is going to be positive but I believe that together we can achieve a lot and there is a big announcement for Longford town on the way too.”