End of an era in Granard as Devine's closes its doors 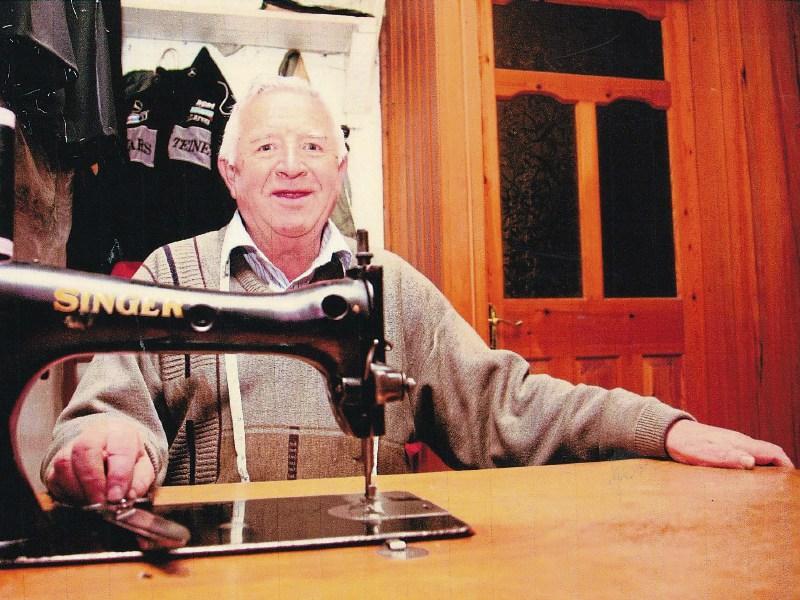 With clothes so dispensable and easy to come by, it's hard for many  to imagine the process of sourcing material, fitting the customer,  and working tirelessly for six weeks for it to be completed to perfection.

However for 80-year-old tailor Gabriel Devine, this is a familiar practice, having devoted his entire life to creating finery for the people of Granard and beyond.

For 90 years, Devine's tailors in Granard provided the best in hand-crafted clothing, a tradition which continued right up to this year. In March,  Gabriel stitched his final suit, and stilled the wheel of his Singer sewing machine one last time, closing the door on the much loved local business which was first opened by his father in 1926.

Having worked in the tailoring shop since he was 14, Gabriel remembered many fond years serving the community alongside his father and brother. Sixty-six years on, and with a grown up family of his own, Gabriel and his wife Pat now look forward to a well-earned retirement.

In a trip down memory lane, Gabriel recalled his father, Michael Devine, cycling to Ballymahon every Monday morning where he learned the tailoring trade from Mr Dermody.

“He would cycle over on a Monday morning and stay until Friday evening and then cycle home for the weekend.

“At that time, Mr Dermody's wife died and he stopped trading, so my father started out on his own. He got a place for a short time in Abbeylara before getting a place in Granard.”

Michael lived in Granard with his wife Agnes (née Madden from Galway), and their family. He carried on the business at their home until his death in 1967.

No stranger to the trade at this stage, having joined the workforce seventeen years previous, followed a year later by his brother Gerard, Gabriel took over the reins.

“In those times there was no going in to college, every young lad left school and went into tailoring, bakery, carpentry, plastering, plumbing; it was all trades at those times, there was no secondary school in Granard. Most of the young lads all became shop boys, there was a lot of shops in Granard,” Gabriel continued.

Indeed Granard was a thriving town with numerous businesses, including eighteen bars, four or five drapery shops, four tailoring shops, two harness-makers, three blacksmiths and several shoemakers and dressmakers all running at one time. There was plenty of trade for everyone and  as Gabriel pointed out there was no such thing as “ready made clothes”. Every house in Granard had something going on.

“In them times the customer would buy the suit length in the draper shop and come down to us for measurement. The draper would then bring it down to us and the thread and lining would be put in but the drapers began to close so we started to stock our own material,” he revealed.

The local drapers weren't the only ones to close, as bit by bit drapers throughout the country began to shut. At that stage, according to Gabriel,  it was difficult to source material or patterns as his own supplier moved from Dublin over to England. However, Devine's persevered through continuous change, manufacturing suits by hand until the day the door closed.

“It would take six weeks to complete a suit from start until finish, but in the end people didn't want to wait that long, they just wanted to be able to go in and get it immediately,” Gabriel admitted.

The wait was always worth it however, as a hand-made suit from Devine's cost  £15 and was made to last a lifetime.

“There was a saying that a man bought a suit to get married in and he was laid out in it,” laughed Gabriel's loving wife, Pat.

Not only did the tailor create fine suits, but he was  also enlisted to make the Garda uniforms for Cavan, Westmeath, Monaghan and Leitrim. Devine's also made suits for Holy Communion and Confirmation, suits for priests going to Maynooth college and special uniforms with gold buttons for Canons.

If the idea of retiring at eighty isn't remarkable enough, Gabriel's work ethic is nothing short of astounding, as he explained how the working week went at the height of his business.

“Back then there was no such thing as a five-day week. In our house we worked from seven in the morning until eight in the evening, seven days a week.

“There was a half day on a Thursday but we never took it.”

This  continued  throughout Gabriel's working life and when asked if he ever took a holiday he simply replied, “very seldom”, while Pat continued: “there was no such thing as even taking a week. We would take a weekend in Galway with the four children, going off the Sunday morning and back the Monday night. It was one night but we got two full days out of it.”

Their four children were never tempted to take on the trade, with Michael working as a banker and Antoinette a primary school teacher, while Mel works at Pat the Baker and Lorna is the Principal of the Science Department in the University of Notre Dame, London.

Tailoring is something their father continued for the love of it, but he accepted it was, sadly, a dying tradition.

Answering why he decided to call it a day after all this time, he reasoned: “I'm 80 years old now, but when I wasn't able to source the material it became a hassle.”

Pat agreed fondly, saying; “it was time to come home”.

With the couple finally getting some down-time after 53 years of marriage, they intend to keep it low key.

They hope to spend some time travelling around Ireland, while Gabriel concluded by laughing that his time will be mostly spent annoying Pat!