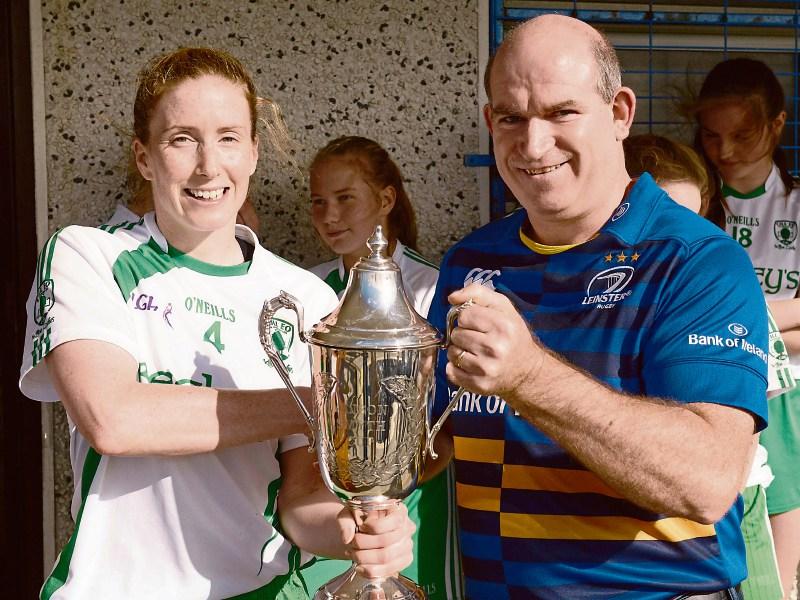 Killoe made amends for the disappointment of last season as they were crowned the Longford Ladies Senior champions for the sixth time in seven years after eventually pulling away to score a comfortable win over Mostrim at Glennon Brothers Pearse Park on Saturday last.

After losing to  Clonguish in the 2015 decider, Killoe were very determined to regain the Alison Smyth Cup this year and they did just that. It was tough on the gallant losers Mostrim who put it up to their strongly fancied opponents for so long but in the end experience told and Con Moynihan’s side were able to claim the victory.

It wasn’t a vintage display from Killoe especially in the first half where they uncharacteristically kicked 11 wides; some easier to score but they did eventually find their rhythm in the second half.

Last year’s Intermediate champions Mostrim could only manage to score one point in the second half; a free from Sarah Tierney, her third in the game, while the other scorer for Mostrim was Loren Katie Logan who grabbed a goal in the first half.

As well as missing chances in the first half Killoe were thwarted by Mostrim’s defence on several occasions but as the game went on Killoe’s forwards started to assert their superiority and show it on the scoreboard.

A free from Sarah Tierney was the game’s opening score. After kicking five wides in a row Killoe eventually got off the mark in the 10th minute when Sabrina Hackett kicked over a free.  Jacinta Brady then put Killoe ahead in the 19th minute. The lead only lasted one minute because Mostrim got a goal in the 20th minute when Loren Katie Logan found the net with a fine finish.

Points were traded between Sabrina Hackett and Sarah Tierney (free) before Killoe tagged on two further points to level the match in the 28th minute and ended the first half well with Fiona Fox and Anne Marie Bratten on target to give them a two point lead at the break; 0-7 to 1-2.

Bratten put three between the sides with just seconds gone on the changeover before Tierney was on target again from a free three minutes later for what was to be Mostrim’s last score of the game. A point from the industrious Anna McDonnell was followed by a well-taken goal from the excellent Edel Quinn to extend Killoe’s lead to six points.

Fiona Fox got a second point to put seven between them in the 41st minute. It was all Killoe at this stage as they kept piling on the pressure. Anne Marie Bratten got her third point of the game in the 49th minute before Edel Quinn fired over a fine point minutes later.

As the clock ticked down both sides decided to bring on substitutes. Despite the changes Killoe never lost momentum and kept up their performance. Mostrim just could not contend with them and when they tried to break for scores they were stopped in their tracks by a resolute Killoe defence who gave nothing away in the second half.

A wonderful point from Anna McDonnell put 10 between the sides in the 52nd minute.  Anne Marie Bratten then followed with her fourth point one minute later to stretch the lead.

Despite having possession and the opportunities to get further scores Killoe did squander chances near the end but it mattered little as they won with considerable ease in the finish.