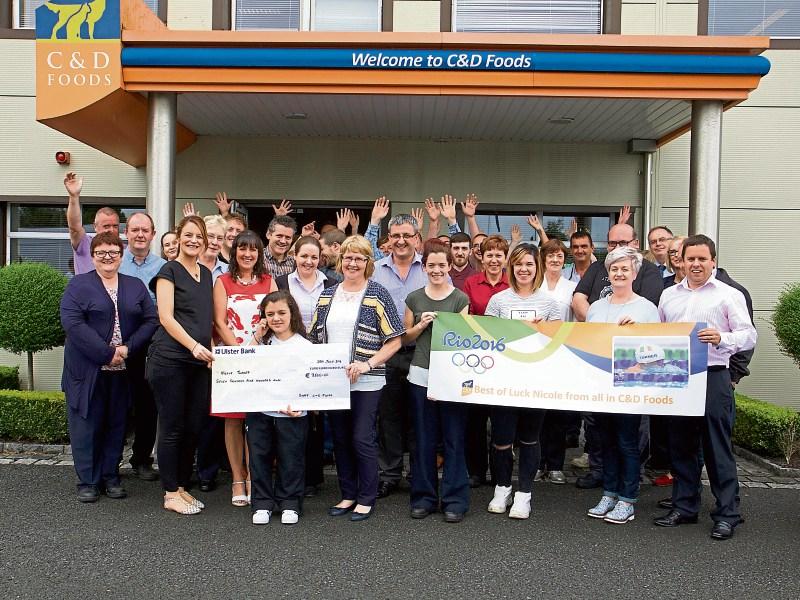 There is huge delight among the staff of C&D Edgeworthstown this afternoon as Team Ireland’s Nicole Turner has progressed to the final of the S6 50m Butterfly Final at the Paralympics in Rio de Janeiro.

The final itself is due to take place at 10.18pm (Irish time) this evening, Friday, September 9.

Swimmer Nicole, from Portarlington, on her Paralympics debut, booked her spot in the final after she finished 2nd in her S6 50m Butterfly heat in a time of 38.44 behind Ellie Robinson of Great Britain.

Nicole’s dad Jason is the warehouse manager at C&D Foods and prior to travelling to Rio, staff at C&D Foods in Edgeworthstown and Mullingar presented Nicole, who was accompanied by her parents Jason and Bernie, with a cheque for €7,500.

At that presentation, Jason said, “The main goal is Tokyo 2020. Nicole is ranked third in the world, so a medal is not that far away. She is doing fantastic and can only get better.”

14-year-old Nicole, the youngest member of Team Ireland, was the fourth-fastest qualifier for the final and she will certainly be in with a serious shout of capturing a medal.

Indeed, Nicole has a hectic schedule as she will also compete in the 50m freestyle tomorrow (Saturday, September 10), the 200m Individual Medley on Monday, 400m freestyle on Tuesday, the 100m breaststroke on Thursday and the 100m freestyle next Saturday week (September 17), before the Paralympics come to a close on Sunday.

Interestingly, if Nicole manages to progress from the remaining heats that she is competing in, it means she will have swam twelve times at these Paralympics.