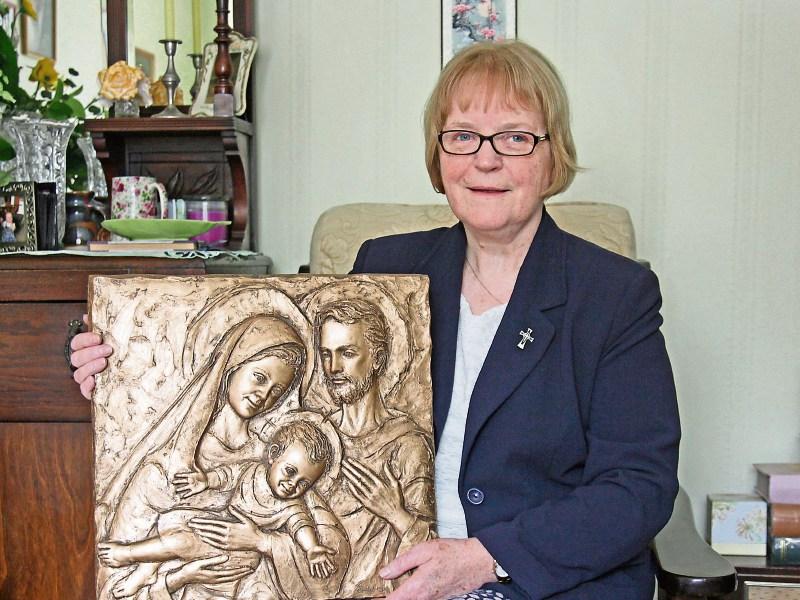 Humility and reticence are qualities many of us aspire to yet rarely master.

They are, however, virtues that invariably sum up the character traits of Forney native, Sr Mary Keegan.

Much of that reasoning was evidenced a little over two weeks ago when the proud Co Longford woman   marked her golden jubilee with the Sisters of Mercy.

That celebration, held within the confines of Forgney's Church of the Immaculate Conception, was as joyous as it was sentimental.

It was after all the backdrop in which the popular nun was baptised and made her First Holy Communion in.

Yet far from revelling in the magnitude of it all, Sr Mary had been hoping to keep matters laid back by imposing an embargo  on any form of public tribute.

“I banned any kind of presentation even though I didn't want to let the occasion pass,” she confessed to the Leader this week.

“I wanted to mark the anniversary of my religious profession but in as low key a way as I could but obviously other people had other ideas.”

As it turned out Sr Mary admitted the day couldn't have gone much better as close family and friends joined her  at Glasson's Country House Hotel for an afternoon filled with emotion and mild reflection.

“I was very humbled  by the people's kindness and good wishes” she confided. “We had a lovely celebration from start to finish.”

The venue's opulent setting, on the shores of Lough Ree, couldn't have been more at odds with the world which Sr Mary first entered.

Born in 1945 and the second eldest of eight children to her dear parents, Mary and the late Tom, Ireland back then was a far cry from the fast-paced, and at times, profuse world it is today.

Opportunities, it can be safely said, were nowhere near as plentiful, never mind attainable.

To get ahead you had to be bright as well as go-getting.

Sr Mary was both.

After attending Forgney National School, she secured a county scholarship to Ballymahon's Mercy Secondary School in 1958.

Having completed her Leaving Cert there, it seemed the young Forgney woman was primed for a career not necessarily  aligned to God's work.

“Originally, I hadn't seen myself as a nun. I actually wanted to teach but in my later teens I felt attracted to doing missionary work,” she said.

It was a calling which prompted her to seek the advice  of  Edgeworthstown nun, Sr Ita Cahill.

As a serving member of the  Sisters of Mercy congregation, Sr Ita was at the time based in  Burnley, a market town in the heart of Lancashire's  manufacuring and aerospace industries.

“It was real wrench to leave as I left my parents and younger siblings very sad,” she poignantly admitted.

It was a decision which brought with it many challenges for the aspiring nun.

“The difference between rural Ireland and an industrial town like Burnley was quite a culture shock at first.

“The Convent was actually opposite Burnley FC and was quite a noisy spot especially when the pubs emptied but as soon as I stepped in the front door I felt I was in the right place.”

The fact Sr Mary had chosen to leave her home and family as well as turn down more financially rewarding careers this side of the Irish Sea was very much indicative of a woman more focused on benevolence than on furthering her own personal aspirations.

“I actually turned down a job in the civil service which I remember people saying was crazy but I followed my dream, God's dream,” she said.

After completing her 'Novicios' or period of internal training, Sr Mary pursued her educational career with spells in Leeds, London and France.

The latter was a destination of which she became especially fond, and which ultimately paved the way to her landing a teaching post at St Hilda's High School back in Burnley.

For the next two decades, Sr Mary excelled in her role, teaching students French, Religious Studies and Pastoral Care.

Life was good. Being   able to spread God's work whilst being deeply immersed in a job she had always longed to do, things couldn't get much better it seemed.

All of that was about to change however.

In 1992, while driving in the north of England, Sr Mary sustained serious injuries  in a car accident.

Little did she know then that it would put paid to her burgeoning teaching career and cause her to continue her religious duties through the  more sedate means of pastoral care.

Following her father's unexpected passing in 1998 at the age of 83, Sr Mary made the decision in 2003 to return home to care for her sole remaining parent.

Like her initial decision to leave home all those years ago, saying goodbye to those she had served alongside in Burnley was equally tough.

“When I came back it did take some adjusting for a while but the community (in Burnley) have been very supportive.

“We  still keep in close contact and I take a couple of breaks a year to keep up that contact,” she added.

Though her first thoughts are justly focused on her mother, Sr Mary is still involved in parish and community life.

A large slice of that focus, has its roots firmly entrenched in the very mantra on which her chosen vocation was founded upon.

“The Sisters of Mercy are a very hands-on congregation that are involved in many aspects of daily life from teaching to nursing and social work and outreach,” she said.

“It is not and never has been an enclosed order. Catherine McCauley who founded the order in the 19th century said its purpose was to help the needy in Dublin and that work has continued right through until today.

“Obviously numbers are dwindling but those of us still standing are doing our best to continue that work.”

Her thoughts on the hardships facing the Church  in enticing new recruits to spread its teachings is just as rational.

“Society from the 60s onwards has gone through quite a big cultural change and the Church is very much part of that. I think that has affected the uptake of vocations to the priesthood and religious life but it's not something I find worrying because I think future religious life as I know it will be very different.”

Her reference to a quote by the order's founder Catherine McAuley that 'If it's God's work, it will prosper', is testimony to her way of thinking.

“We have to listen and see where the Lord is calling us to, but it's not something that depresses me at all - far from it.”

Perhaps fittingly, and not for the first time, a quotation from the Bible - and more specifically from the Book of Matthew - is called upon to spell out those feelings.

“There's no need to worry about tomorrow, for tomorrow will worry about itself,” she said.