Unlucky 13 for Longford in IBAL survey 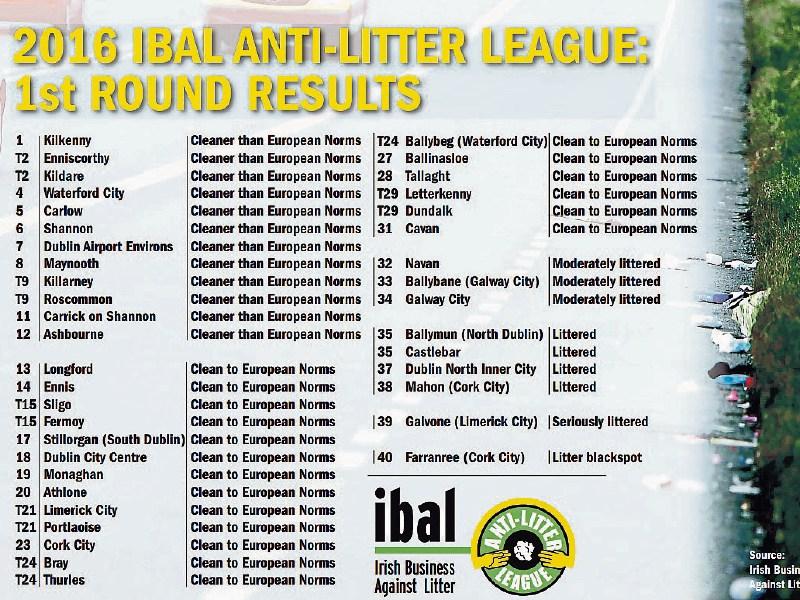 It was a disappointing day for the county on Monday, when the Irish Business Against Litter (IBAL) first round results were released.

Having scooped the top prize for being cleaner than European norms last year, Longford has suffered a steep drop, settling in thirteenth place so far this year.

While most of the ten areas surveyed, including Ballymahon Street, Main Street, the bottle bank at the Market Square and the train station received an A Grade, two areas - Roscommon Approach Road and Townparks Industrial Estate - were given a Grade B result, though according to the results, there were “pockets” within the latter area that verged on Grade C status, or seriously littered.

The most heavily-littered area, earning a Grade C, was Longford Retail park on the N63.

“In IBAL Survey 1, 2015 this was noted as a seriously littered site and the same air of carelessness and neglect has prevailed,” the results read.

“It is quite unusual in IBAL litter surveys to see a shopping centre score so poorly - it was riddled with litter along the pavements, car park and storage areas behind some premises were particularly poor.”

“To drop from number one to number thirteen is not ideal,” admitted Longford Tidy Towns Chairman, John Farrell, when he heard the results. “We are disappointed but it doesn't dampen our attitude.

“It's an ongoing battle but it's not about marks on a sheet, it's about pride of place.”

Encouraging further co-operation within the community, both in terms of physical and monetary assistance, John then tackled the matter of the C Grade at Longford Retail park, pointing out that the area is privately owned. While they have made contact with owners before, the Chairman agreed that they would endeavour to do so again ahead of the final results at the end of the year. He also called for members of the public to get involved in the clean up by contacting himself or any other member of Longford Tidy Towns.

Having jumped from sixth place to first in last year's competition, John is hopeful that Longford will fare better than its current position.

“We're very hopeful and very positive. The fight continues. We will stick with it - we have no choice. It's all about co-operation, it's about people coming on board.

Meanwhile, Roscommon and Carrick-on-Shannon have fared slightly better in the first round survey,  earning joint 9th and 11th place respectively for being cleaner than European norms, while Athlone sits at number 20 on the board, followed in number 31 by Cavan, who, like Longford, are clean to European norms.