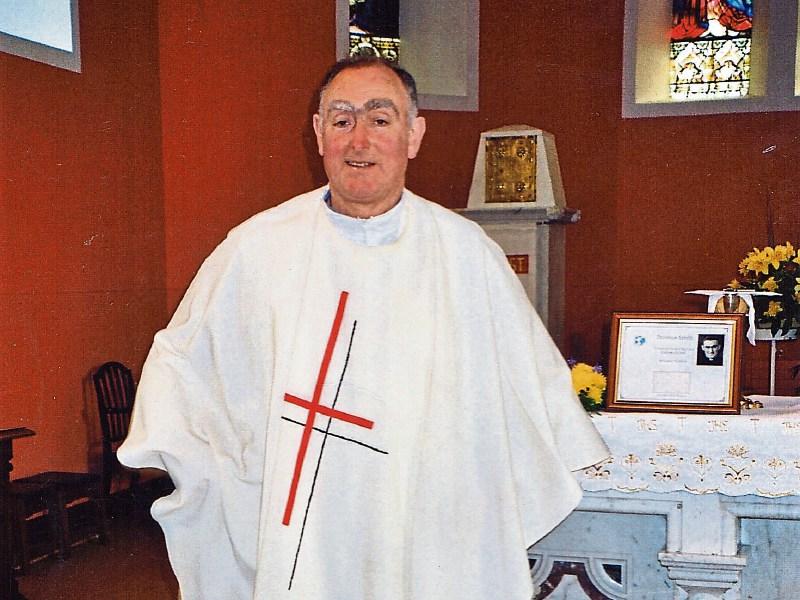 Fr Thomas Smith, who recently passed away, was born in 1940 into a farming family at Kilcogy Upper, Co Cavan in the parish of Mullahoran. He attended Kilcogy NS and St Mel’s College, Longford.

From St Mel’s he joined the St Patrick’s Missionary Society, Kiltegan in 1959 and was ordained to the priesthood there on Easter Sunday 1966.

As a missionary priest he was appointed to Minna, Nigeria, where he ministered until 1970 when he was transferred to the diocese of Eldorat, Kenya. He founded and worked in many new parishes there, building churches and schools, working tirelessly for the poor and disadvantaged, travelling across the rough terrain on his trusty motorbike. During this time he was assisted financially by the local Mullahoran Apostolic Society who gave enormous support for almost fifty years.

He was appointed Vicar General of the diocese in 1974 and became Diocesan Administrator in 1989, carrying out these duties in addition to all his other parish work. He was a gifted linguist and he immersed himself totally in the culture and life of the people he served.

Though big in stature, Fr Tomsie as he was affectionately known, was a gentle, kind and humorous man who liked the simple life with no needs, no pretence and no airs or graces. Indeed he was given the title Monsignor in Eldorat but he never used it.

He had a great love of traditional Irish music and he played the tin whistle from his youth and was Ulster champion at the All-Ireland Fleadh in Longford in 1958 before he entered Kiltegan.

However, his first love was Gaelic football. A talented player, he played centre field for St Mel’s College and filled that position for his own Mullahoran when they drew with Bailieboro in the Senior Championship in 1963. Unfortunately he had returned to his studies in Kiltegan and was unavailable for the replay which they won. He also played for a time with Cavan Gaels and gained a place on the county team.

Though his missionary work brought him far from home he never lost touch with his native parish and always kept up with events and especially its fortunes on the playing field.

Fr Tom returned to Ireland with health problems in 1993 and from then on he did not enjoy good health. However, he tried to continue as usual, working in various parishes and he even returned to Kenya for a few years. Among the places he worked in Ireland were Foynes, Loughlyn, Ballingar, Doobally, Aughnasheelin and lastly as Chaplin at Maryfield, Chapelizod with The Congregation of the Servants of the Mother of God.

Fr Tom passed away peacefully among his community at Kiltegan on July 30 surrounded by his family and Care Unit staff and is buried in the cemetery there. He was predeceased by his sisters Mrs Nora Conway, (Dubin), Mrs Phyllis Woods, (Tyrone), and Mrs Helen Lynch (Mullahoran), and by his brothers Jimmy (Kilcogy), Tony (Ashbourne) and Oliver (Dublin), and their families. Ar Dheis Dé go raibh a Anam Uasal.