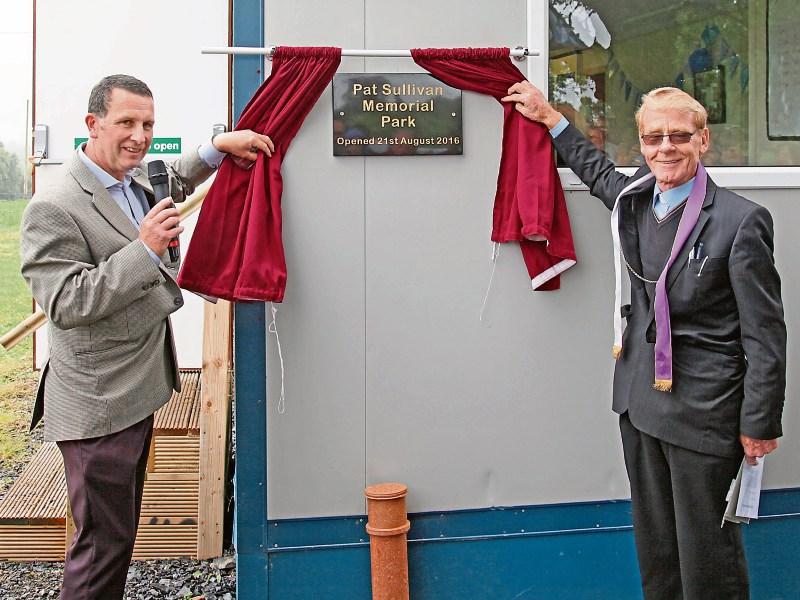 The pitch, which is in Aughintemple, has been in use for ten years, but following Pat’s death two and a half years ago, the club committee decided to name the venue in his memory.

Club Chairman Sean Farrell explained to the Leader: “Pat owned the field, which was developed into the pitch in 2006.”

The event was well-attended on the day, by members of the club and the Sullivan family. An U-8 and U-9 mixed fun game preceded the official opening, while there was a nursery fun game and mixed fun games for all players, from U-10 to U-15 level.

Mr Farrell led the proceedings with a history on the club, followed by Clem Sullivan who spoke on behalf of his father. Fr Pat Lennon unveiled the plaque before blessing the grounds and the clubhouse.

The pitch gets great use locally. “We have three 11-aside and eight 7-a-side teams,” remarked Mr Farrell.

Ardagh United was formed in 1999 by Sean Farrell and Enda Dowd. Sean is the current chairman and he serves alongside vice-chair Michael Hayden, Michael Mulleady secretary, treasurer Martin Keane and Patricia Hughes PRO.

The club has gone from strength to strength since, with a new clubroom opened in 2015. Mr Farrell thanked Edgeworthstown school for the donation of the prefabs which are now in use as the clubrooms.

He concluded by thanking everyone who attended on the day, all who helped in fundraising over the years and he extended a special thanks to the Sullivan family for donating the pitch.

Thanks were also expressed to Henry and Kate Vaughan and Vaughan's Daybreak for sponsoring all the kids treats.

Over the years Ardagh United have won many trophies and they hope to enjoy further success in the years ahead.