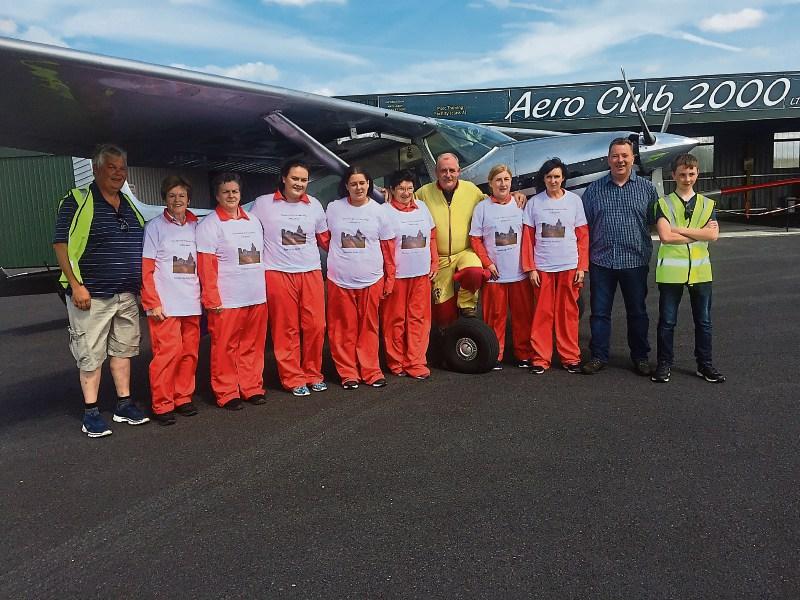 Known for facilitating flight, visitors to Abbeyshrule Airfield could be forgiven for being a bit confused on Monday, August 15 as seven people fell from the sky.

82-year-old Ursula McGoey was among the skydivers, naming themselves 'The Magnificent Seven in the Flying Machine' who took the plunge to raise money for Abbeyshrule Tidy Villages 'Illuminate the Cistercian Abbey' fund.

A self-proclaimed adventurer, Ursula has worked all over the world but has now retired to her homestead in south Longford.

If there was ever a doubt in your mind about doing a skydive, Ursula would soon put it at ease, describing the initial flight as being; “just like a regular plane, it was like going on holiday.”

She continued, “We got on 100%. We were talking and laughing amongst ourselves and at five thousand feet they gave us the warning.

“We were not expecting the door to shoot open at ten thousand feet, then we were just ejected out into space.”

While those thoughts are  enough to make even the strong-hearted feel faint, Ursula revealed that she enjoyed every moment.

“It was really lovely, for the first five thousand feet we were free falling, it was really windy and I could just see clouds.

“Then the parachute went out and it was a wonderful view all across the Midlands. I could have stayed floating up there forever, away from all the upsets and troubles of the world. I would recommend it to everybody.”

Spectators cheered on the group as they made what Ursula described as a  “soft landing”.

When asked if she would do it again, she laughed, saying, “I wanted to go up again straight away”.

The Cistercian Abbey was founded in 1150 AD by the Cistercians who came to Abbeyshrule, and this jump was to fundraise for eco-friendly and cost-efficient LED lighting powered by solar panels to light up the Abbey.

“We are working with the Heritage Officer Mairéad Ní Chonghaile on the project as it is a protected building,” Ursula explained, saying the lights will be placed outside of the walls of the Abbey.

The adventurer then  laughed; “We don't want to break any laws and end up in prison. I've kept out of it this long,” before concluding with a note of thanks.

“Without their combined excellent assistance, 'the jump'; would not have been so successful,” Ursula explained.

“A sincere word of  thanks also to Father Charlie Healy who included us in his prayers and also to our very generous sponsors, family, friends and neighbours who gave us a great send off - míle buíochas!”