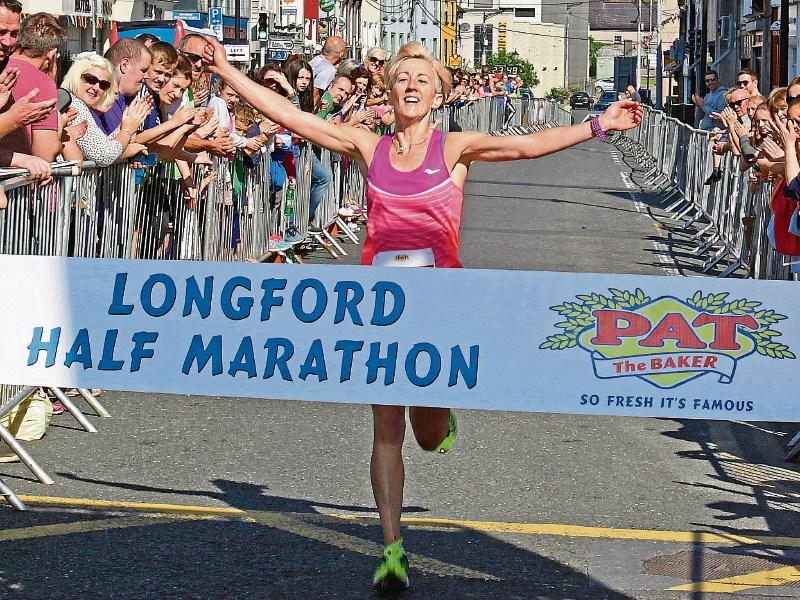 It's been widely dubbed Ireland's 'friendliest' marathon and from the evidence of last weekend, the 15th Pat The Baker Longford Marathon more than lived up to that billing.

Close to 900 comptetitors took part with participants travelling from across Europe and as far as the Unites States.

Louth's Gary O'Hanlon crossed the line first in the men's category with a time of 2 hours and 28 seconds with Pauline Curley (2:56) securing first place in the women's section.

There was a local feel to proceedings too when Clonterm man Kevin Ward came home in fourth with a very respectable time of 2:53.

The 44-year-old, who was competing in his third tilt at the Longford Marathon, admitted climatic conditions had taken their toll.

“It was a tough day to be honest as I am not used to that sort of heat.”

Kevin confided had conditions been somewhat cooler, he may well have managed to secure a place on this year's podium.

“That was the plan,” said the Longford Athletics Club runner.

“You'd do your training most of the year when in the cold and rain and then when the race comes you get the hottest day imaginable.”

If the baking sunshine was prying on the minds of some, for others like 'marathon man' Liam Fenelon, it was a day of immense personal achievement.

Asked if he was contemplating hanging up his runners, Liam was quick to play down any such talk.

“I am going to do the Louth Marathon next Saturday because it and Clare are the only ones (marathons) I haven't done,” he replied.

Among them was Killoe's Laura Doherty.

The trained doctor has made a miraculous recovery since being  involved in a serious car accident a number of years ago.

The latest evidence of that came last Sunday when she took on and successfully finished  the 5km challenge alongside her mum Pat and cousin, Paddy.

“There were so many nice stories to come out of it,” said one of this year's race organisers, Fiona Fenelon.

“We got great support from businesses, the stewards, gardaí, everyone was fantastic.

“This (marathon) is not just about the committee, it's about everyone, the whole of Longford and since Sunday we have got so much feedback about how friendly the whole thing was.”

The question now is, can the events of last Sunday be surpassed?