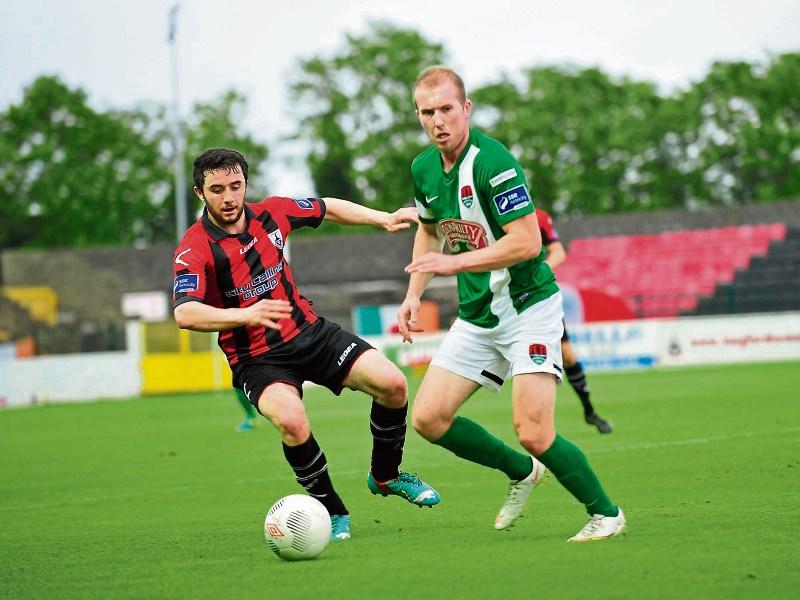 Longford Town, rooted at the bottom of the Premier Division league table, were always facing a daunting task against a superior Cork City side in the FAI Cup third round clash at City Calling Stadium on Saturday night last and so it proved to be.

Caretaker manager Gary Cronin was in charge as the new boss Alan Mathews took his place among the official dismal attendance of just 321 to witness the enormity of the job he is taking on in the slim hope of saving Longford Town from the dreaded drop back down into the First Division.

And as it turns out, Mathews first game back at the helm in Longford is against his former club Cork at Turner's Cross this Friday night with the league game being  televised live on RTE.

Great credit to the grounds people who worked very hard throughout a very wet day to ensure that the cup fixture went ahead and with water still resting in certain parts of the pitch the conditions were difficult.

But it really did not matter as Cork were in a different class as they dominated this one-sided encounter from start to finish to win with ease. And things could have been even worse for Longford as the visitors squandered several clear-cut chances of emerging victorious by a much wider margin.

Cork took the lead as early as the 4th minute when a free-kick awarded just outside the box was played short by Greg Bolger into the path of Kevin O’Connor who drilled a low shot through the Town wall and past the opposing keeper Paul Skinner into the back of the net.

A shocking start, to say the least, and while the loyal home supporters were furious after Dublin referee Neil Doyle ignored a foul on Eddie Dsane on the edge of the box in the 10th minute when a free-kick should have been awarded that was as good as it got for Longford in the first half.

Cork created a lot of chances and after Town netminder Skinner done well to keep out a diving header from the slipping Sean Maguire in the 28th minute, a glorious opportunity fell to the completely unmarked Stephen Dooley soon after but he directed his header wide with a goal there for the taking.

Nothing was going right for Longford and branding Jamie Mulhall with a yellow card following a 50/50 clash with Steven Beattie was a very harsh decision by the match official.

But it must be said that Cork should have been at least 3-0 in front at the break and Longford launched a rare attack in the 49th minute when Kevin O’Connor broke through with his long range shot off target.

Back came Cork in search of a second goal and after a powerful shot from Karl Sheppard was deflected over the bar by Skinner in the 59th minute, the pressure continued to pile on Longford whose resistance was eventually broken in the 68th minute when the ball bounced kindly for Sean Maguire who raced through to hit the target.

Two minutes later Cork scored again when Sheppard directed the ball into the corner of the net to put the issue beyond all doubt, although Longford did manage to snatch a consolation goal in the 79th minute.

A Philip Gannon free-kick was parried by Cork keeper Mark McNulty and the ball broke into the path of Eddie Dsane who made no mistake with a fine finish from close range.

Cork went close on three more occasions late in the game before they finally got a fourth goal deep into stoppage time. Substitute Chiedoze Ogbene shot past Paul Skinner with virtually the last kick of the game to complete a most emphatic victory for John Caulfield’s side and a place in the FAI Cup quarter-finals.