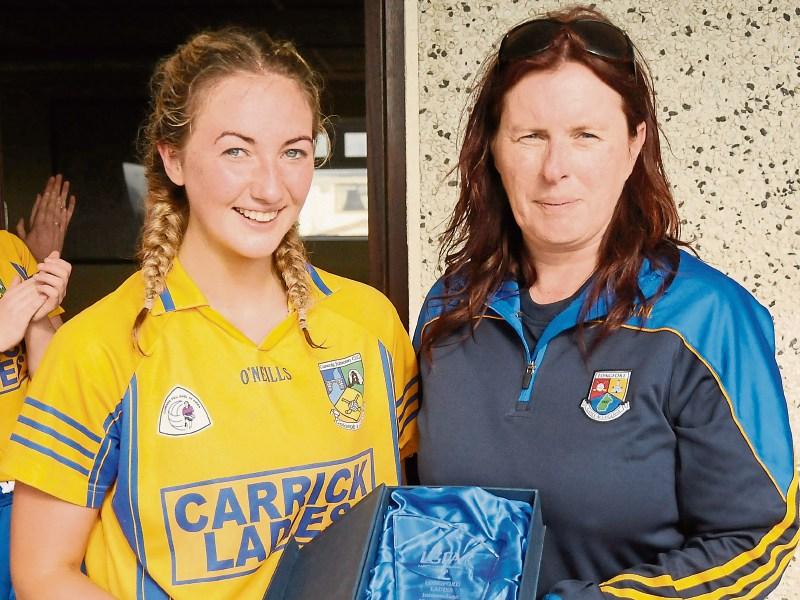 After losing the previous two county finals, it was a case of third time lucky for Carrickedmond as they finally captured the Longford Ladies Intermediate title with a deserved win over neighbours Ballymahon/Forgney at Glennon Brothers Pearse Park on Saturday last.

The hurt of those defeats spurred on Carrickedmond to this title triumph and they weren’t going to leave this final behind them again.

Last year’s Junior champions Ballymahon/Forgney put it up to Carrickedmond and really made a game of it and were unlucky to hit the crossbar in the second half. In the end it was Carrickedmond’s experience that told with Michelle Mulvey excellent throughout while Sarah Shannon and full-back Anne Ryan also played their part in this fine victory.

The first half was ruined by the driving wind and rain. Carrickedmond had the better of the exchanges but didn’t get the scores on the board to show their dominance.

By the 11th minute they had opened up a three point lead but Ballymahon/Forgney fought back to level matters by the  27th minute and then went  ahead for the first time in stoppage time thanks to a Ciara Fox point.

Niamh Feeney got the equalising point for Carrickedmond just before the half-time whistle to leave it deadlocked at 0-5 apiece going in at the break. Carrickedmond made a fine start on the changeover and were able to hold on when they went in front. Ballymahon/Forgney ended up with 14 players after Sarah Horan was sin binned in the 56th minute.

Early points were traded between Sarah Shannon and Ciara Fox (free) before Carrickedmond took a hold on the game and scores by Emer Powell, Michelle Mulvey and Shannon (free) gave them a three point lead by the 11th minute. Powell was unlucky to see her effort come off the crossbar in the sixth minute after being set up by Mulvey.

Ballymahon worked hard to get back into the game and points from Ciara Fox (free), Shannon Reed and Keelin O’Connor left them level by the 27th minute and then a further score each were exchanged between Fox (free) and Niamh Feeney before the break.

Two fine points from Michelle Mulvey gave Carrickedmond a two point lead by  the 37th minute. Ciara Fox replied for Ballymahon/Forgney before Mulvey brought a fine save out of opposing keeper Joanne McCormack.

Sarah Shannon and Fox then exchanged frees but by the 49th minute Carrickedmond were  three ahead with fine points from Shannon and Emer Powell.

Ciara Fox was on target again from free in the 50th minute and then Keelin O’Connor was unlucky to see her shot hit the crossbar in a goal attempt. Try as they might Ballymahon/Forgney couldn’t get any more scores and a fine point from Emer Powell in the 55th minute clinched the county title for Carrickedmond who can now look forward to the Leinster Junior Club Championship clash away to the Meath winners on September 10th.