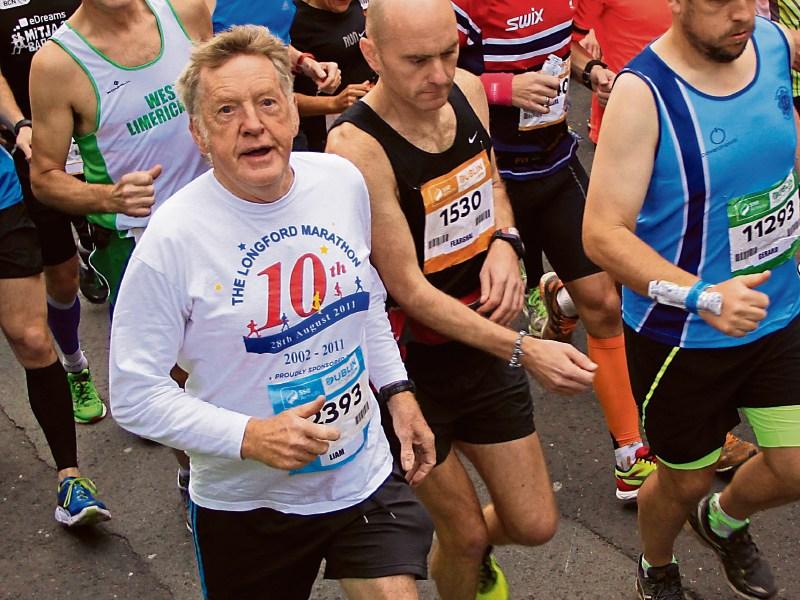 Completing a marathon is  an impressive achievement, but this year’s Pat the Baker Longford Marathon will be extra special for 74-year-old Liam Fenelon.

When the Longford businessman crosses the line at this year’s event, set to take place on Sunday, he will have completed his 300th marathon.

Speaking about the milestone, Liam laughed; “I was interviewed on television by Ciaran Mullooly. RTÉ came to Slashers for my 100th marathon and he said; ‘you’ll do your 200’, and I said ‘absolutely no way’!”

From his first marathon in 1984 in Galway in his forties to now, Liam’s passion for running has taken him all over the world.

“I’ve been lucky enough to do marathons all over. I’ve done the top six in the world. You have to do all six and I’ve done them all. They’re New York, London, Chicago, Boston, Tokyo and Berlin.”

Liam has also covered much of America, Europe and, after completing the Louth marathon for which he has signed up in September, will only have two counties remaining in Ireland to run.

“There’s a lot of good memories and I got decent times,” he continued.

“I think it’s far better for the head than it is for the body,” he confided, pointing out that it helped him work through the stress of owning three shops.

Meeting new friends is another personal highlight for Longford’s marathon man, who hopes to complete this year’s marathon in approximately 5 and a half hours.

Giving an example of this, he told a story of a marathon in Rome approximately 20 years ago, when none of the race volunteers spoke English.

“I heard a man that was speaking English and I made sure to catch up with him,” he laughed. The man was from Birmingham, and in the intervening years, the two have struck up a friendship which stands strong to this day.

Despite having participated in marathons all over the world, Liam reserved special praise for the Longford Marathon, where he completed his 100th and 200th marathons.

“It has done very well,” he smiled. “We had fifteen countries represented last year, I think we’re something the same this year. So it’s definitely good for Longford.”

With entry numbers already increased from last year, as well as the introduction of a 5k route, which, as the name suggests, takes in the ‘Streets of Longford’, the event shows no sign of stopping.

Known as the ‘friendliest marathon in the heart of Ireland’, this year’s event will take on a more festive atmosphere, with face painting, spot prizes and busking to entertain the spectators. Dubbed ‘the Three Musketeers’ by organisers, Benny O’Brien, Joe Flaherty and Paul Gurney will be on hand to reveal results and announce the runners. Shannonside Radio will broadcast on the day and Pat the Pan from main sponsors Pat the Bakers will be mingling with the crowd.

Also an annual volunteer with the Niall Mellon township, Liam was keen to thank those who have supported him in both endeavours. Urging locals to line the courses in support of the athletes, Liam finally paid tribute to the spectators, businesses and volunteers who keep the Longford Marathon running year after year.

“I just hope that the marathon will continue and it’ll still be supporting the different charities in years to come,” Liam concluded. “Whether I’ll be doing it again or not I’m not sure. You have to take every year as it comes.”

For more information on the Pat the Baker Longford Marathon, visit www.longfordmarathon.com.

Interested parties  can still enter for all the races online until midnight on Friday, August 26 or in person at The Computer Clinic, Main Street, Longford and in The Longford Arms hotel Saturday from 1pm to 5pm.