Robbie Clarke goal crucial as Slashers storm back to win 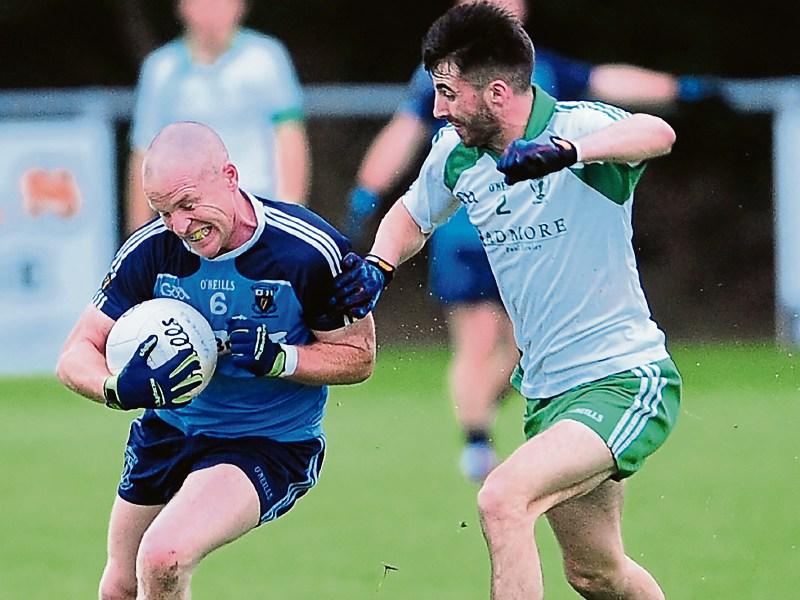 After all the controversy surrounding the original fixture and the subsequent delay in the progress of the Senior Football Championship, the Group 1 second round replay eventually went ahead at Maguire Park on Sunday evening last with Slashers showing a lot of character in storming back from five points down to beat Killoe by the minimum of margins.

Played in difficult wet conditions, Emmet Og were looking good when they led by 0-7 to 0-2 at the break and were still four points ahead (0-11 to 0-7) before Slashers were thrown a lifeline thanks to a cracking goal from corner-forward Robbie Clarke in the 48th minute after his initial attempt was well saved by Killoe keeper Shane Fitzpatrick.

Boosted by the powerful presence of Michael Brady at midfield in the entertaining second half with excellent support from Andrew Dalton, the terrific recovery continued with points from Daniel Smith (well struck free), Dalton and Brady swinging the game in favour of Slashers who worked extremely hard to rescue the situation.

Killoe now trailed by 1-10 to 0-11 and while Sean McCormack converted a free in the 59th minute to leave just a single point separating the sides, Slashers stuck it out for the win with Barry Gilleran clearing the danger in a last gasp attack by the county champions.

The absence of the injured Mark Hughes and long term casualty Michael Quinn, in particular, has left Emmet Og in a vulnerable state and while the pressure is now on after losing two games they can still qualify for the quarter-finals as they battle it out with St Mary’s Granard on Sunday next for the remaining place in the last eight.

Slashers, on the other hand, are through to the knock-out stages and just the top spot in Group 1 will be at stake when they meet Clonguish this weekend.

Considering that they were forced to field minus the suspended duo Conor Clarke and Liam Barry, with injury ruling Paul Kelly and Sean Clarke out of the rematch against Killoe, this was a fine win for Eugene McCormack’s side who are mixed by a good blend of experience and youth.

Despite the wet weather, a big crowd gathered at Maguire Park to watch the latest clash of these fierce rivals and fair play to the County Board for donating the entire gate receipts (admission was €5) from the game to the St Christopher’s charity.

With the so determined Padraig McCormack leading the charge in the middle of the park, Killoe (who were also without the injured Denis McGoldrick) got off to a great start to lead by 0-4 to 0-0 after just nine minutes with the scores coming from Ronan McGoldrick, Paddy Thompson and the McCormack brothers.

Slashers were very sluggish indeed and while they hit back with a point apiece from Andrew Kelly (free) and Robbie Clarke (on target in the 12th minute) in quick succession they failed to register another score during the remainder of a very scrappy first half performance after shooting a few bad wides.

Emmet Og, who were also guilty of some poor finishing, regained the upper hand to register three more points through Ronan McGoldrick, Daniel Mimnagh and Paddy Thompson but suffered a setback when Shane Dowd was dismissed for a black card offence in the closing stages of the first half.

Slashers needed a strong start to the second half and it materialised with a point apiece from Niall Mulligan, Barry Gilleran (a great score) and Brian Walsh in the space of three minutes to get right back into contention.

But Killoe then enjoyed another dominant spell that yield three more scores from Sean McCormack (free), Ronan McGoldrick and the prominent Daniel Mimnagh and that was really putting it up to Slashers.

A fabulous point followed from Andrew Dalton and after substitute Ruairi Clarke had a goal attempt blocked,  his brother Robbie fired the breaking ball over the bar.

Ronan McGoldrick landed a very good score for Killoe in the 43rd minute to consolidate their comfortable lead and both sides then created goal chances with Daniel Smith having his close range effort saved by Shane Fitzpatrick while Emmet Og substitute Ryan Moffett had a shot deflected just wide of the post.

From there until the finish it was Slashers who took  control, mainly due to  the dominance enjoyed at centrefield by Michael Brady and Andrew Dalton, and their side succeeded in outscoring  Killoe by 1-3 to 0-1 to clinch a narrow win with wing back Peter Brady also most prominent.