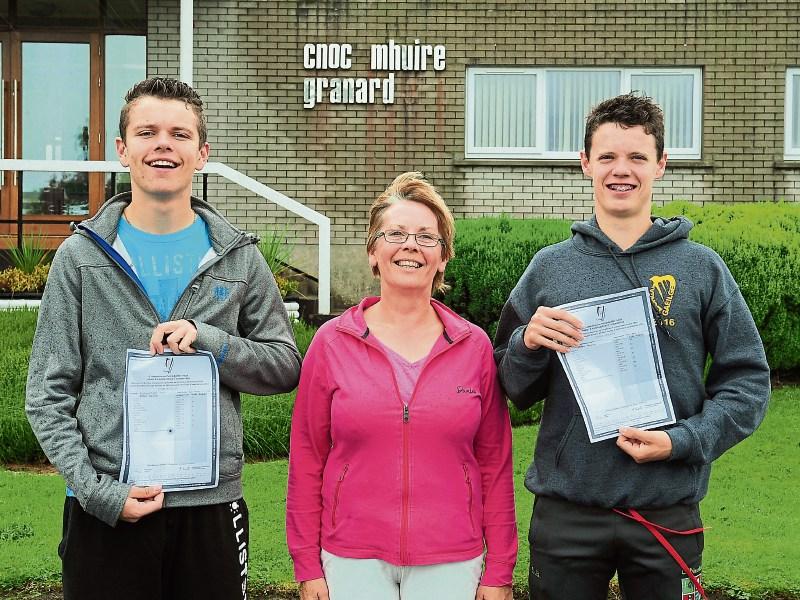 Wednesday was a memorable day for the Brady family of Purth, Colmcille.

After a nervous wait of two months, Stephen and Nathan, sons of Seamus and Joan, opened their Leaving Certificate results at Cnoc Mhuire, Granard, revealing the spectacular grades they had earned.

Both known for their musical talents, along with their sister Rebekah, Stephen and Nathan earned 600 and 515 points respectively.

“I'm over the moon,” Nathan said, admitting that he had been thinking of the worst case scenario. Aiming for around 550 points, Nathan said he “jumped for joy” on opening his results. He now hopes to realise his childhood dream by studying Medicine in Trinity College, Dublin.

“When I was in Senior Infants the teacher asked us all what we wanted to be. I said 'a doctor', and it hasn't changed,” he smiled.

Nathan's older brother Stephen said he had also been “expecting the worst,” and was in disbelief when he realised he had earned 515 points.

“I was ecstatic - I was worried whether I had calculated it right so I checked it twice!”

He  explained that he now hopes to study Primary School Teaching in St Patrick's, Drumcondra.

The brothers weren't the only pupils to achieve high marks in the county. One student in both Mercy Secondary School Ballymahon and Lanesboro Community College exceeded 600 points in what proved to be a record year for the Lanesboro school.

In Meán Scoil Mhuire, an ecstatic Wiktoria Glogowska, who arrived to the school from Poland in her second year, was blown away when she realised that she secured 600 points.

After reading her results, which consisted of 6 A1s and a B2 in English, she exclaimed; “I can’t believe it. I can’t believe the As, I didn’t expect it at all!”

Wiktoria, who plans to study Science in University College Dublin (UCD)  was one of three in her school to achieve top marks. Her classmate Alannah Dolan, a native of Derryadd, Killashee was likewise thrilled with her performance in the exams.

“It was a surprise - thank God the work paid off!

“I was just hoping it'd go all right.”

In reality, it went more than just “all right” for Alannah, who earned an impressive 615 points.