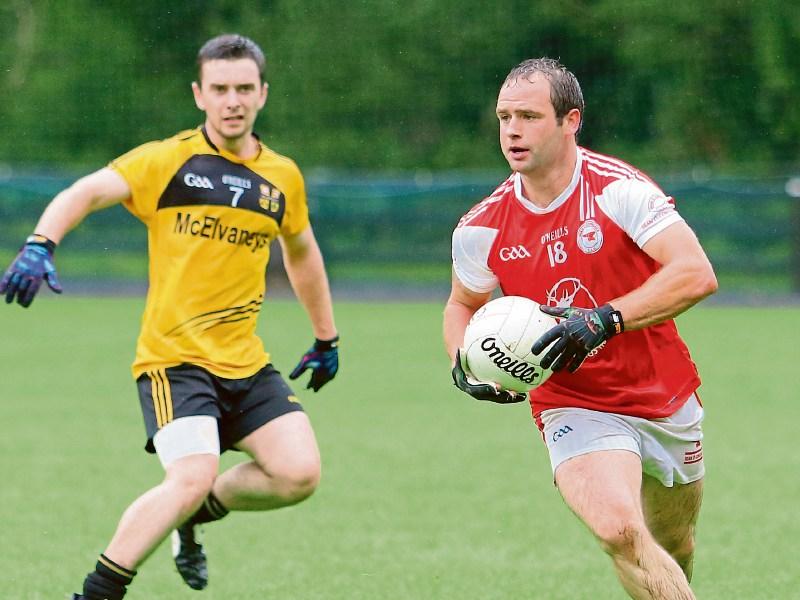 In the end it was all too easy for Sean Connolly’s as they progressed to the Intermediate Football Championship semi-finals but they had to overcome an early four point deficit in the Group 2 clash against Ballymore at The Laurels, Mullinalaghta on Sunday last.

After Connolly’s had registered the first score, Ballymore replied with a goal from Kiel Dempsey. They tagged on three points and in the sixth minute held a four point lead but with the fantastic Dessie Reynolds leading the charge for Connolly’s they gradually got back in the game.

A stunning goal from Reynolds in the 20th minute turned the game in Connolly’s favour and they added on further goals from Frank Reynolds and Adrian Dalton to give them a most emphatic eleven points win in the end.

Frank Reynolds opened the scoring for Connolly’s in the first minute but Ballymore replied with a goal from Kiel Dempsey. Dessie Reynolds then hit over a point for the Ballinalee side but frees from Damien Monaghan (2) and Kevin Flynn put Ballymore four ahead.

Stephen Lynch, Reynolds and Daire Duggan hit over points to cut the deficit to just one by the 18th minute and Connolly’s took the lead two minutes later when Dessie Reynolds found the back of the net. The lively forward made the run and made no mistake with an excellent finish.

Padraig Brady added a point before Frank Reynolds got Connolly’s second goal in the 25th minute. Ballymore were struggling and with Brendan Treacy excellent in defence they found it hard to create attacks.

A free from Damien Monaghan in the 27th minute was Ballymore’s first score in 21 minutes and Padraig Kavanagh then added another point to leave Connolly’s leading by 2-7 to 1-5 at the break.

Frees were exchanged between Dessie Reynolds and Bernard McElvaney in the early stages of the second half before Padraig Kavanagh hit over an excellent effort for Ballymore.

Stephen Lynch and Dessie Reynolds fired over frees and the lead was eight points by the 42nd minute when Adrian Dalton got Connolly’s third goal. Kevin Flynn pulled a point back for Ballymore in the 45th minute.

Substitute Joe Heaney did all the hard work before Paddy O’Neill hit over a fine point for Connolly’s in the 49th minute. Heaney then brought a save out of Ballymore keeper Mattie McCrann in the 50th minute and Adrian Dalton followed up with a point.

Padraig Brady and Heaney were then on the scoresheet as Connolly’s stretched their lead to 12 points by the 56th minute. Any time Ballymore went looking for a score they were denied by a resolute Connolly’s defence.

Damien Monaghan hit over Ballymore’s final score in the 60th minute when he was on target again from a free. The last score of the game was a point from a Stephen Lynch free as unbeaten Connolly’s finished top of Group 2 and now meet Cashel in the Intermediate Championship semi-final in a couple of weeks time.