'Rapunzel' the seal makes waves with visit to local vet 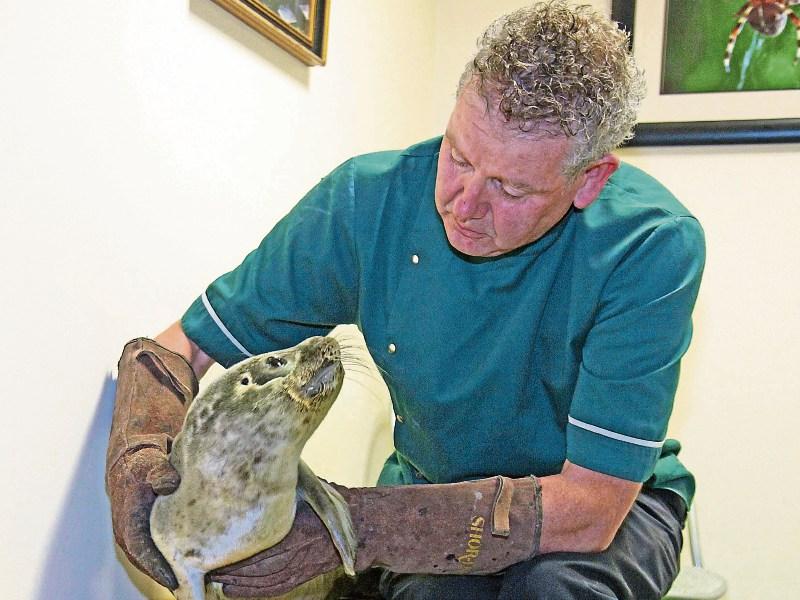 A stranded seal, known as 'Rapunzel',  became an unexpected patient in a Longford vet's practice on Tuesday last, August 9.

The seal was found washed up and badly in need of first aid on Strandhill beach, Co Sligo.  On her discovery, Seal Rescue Ireland in Wexford were notified, who in turn contacted Longford vet James Victory to provide a resting point en route to their sanctuary.

“The Seal Sanctuary contacted me, and I took it in on Tuesday morning,” explained James.

Having been transported from Sligo to Longford in the boot of a car, it was in some distress on reaching the vet.

“I gave the seal first aid, it had a chest infection, and I got her cooled down,” James continued. “She was in distress when she got here, but we nursed her and she was well on the way to recovery when the sanctuary came.”

While the clinic has nursed an array of creatures from snakes to exotic birds, and the usual rabbits and rats, the seal is a first for the Longford vet.

“Other than seeing them in the sea,” said James, “I've never had one before, she's one of my most interesting clients of the past few years.”

Rapunzel was then transported to the Seal Sanctuary in a special water bath container, where she's under careful supervision.

“She's improving, which is a good sign, but she's not out of the woods yet,” explained Ivan Kelly of Seal Rescue Ireland.

“She had two bites on her lip which had turned into abscesses, but they are healing faster than we anticipated.

“She was dehydrated and hungry, but we have stabilised her and she's well on the way to recovery.”

When asked if they had named the seal Ivan laughed, saying; “We don't like to name the seals until they're fully out of the woods, in case we become attached, but the working name on this one is 'Rapunzel'”.

Seal Rescue Ireland is a charitable organisation who rescue seals that  have gotten into trouble or been abandoned by their mothers.