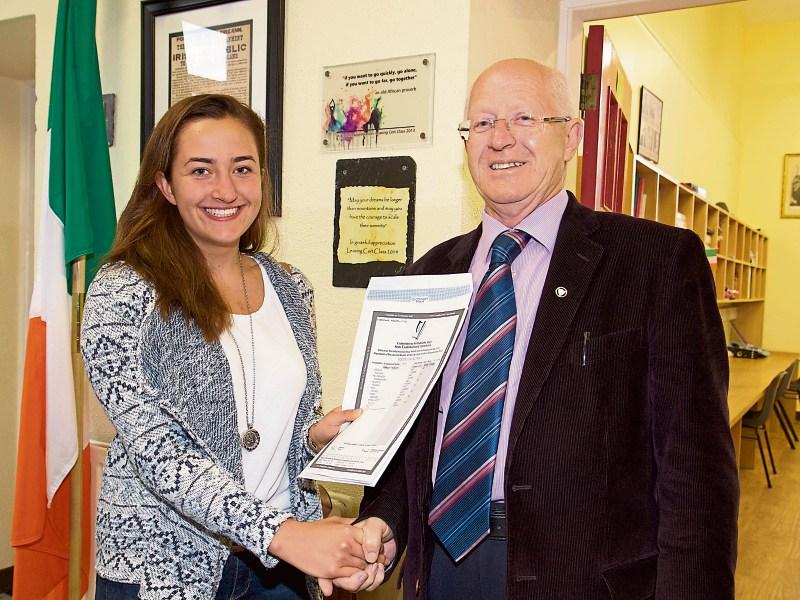 There were plenty of smiling faces emerging from Meán Scoil Mhuire, Longford, this morning, Wednesday, as the class of 2016 filed in to collect their Leaving Certificate results.

Former Principal Paul Costello and Deputy Principal Mairéad Lyons were on hand to greet the girls and Mr Costello revealed that at least three students had secured 600 points.

One such pupil was Wiktoria Glogowska, who arrived to the school from Poland in her second year.

Clodagh Gray was also thrilled with her results and remarked on the amount of people who collected their results but didn’t open them.

“I couldn’t not open mine,” she laughed, before admitting, “I nearly couldn’t get the envelope open!”

“I want to do Physio in UCD hopefully - if the points don’t go up,” she added.

Twins Patricia and Catriona O’Hara were all smiles as they compared results.

“I’m happy enough now,” Patricia told the Leader. “I just have to wait on offers now.”

Aoife Gordon, who also performed exceptionally, admitted that she had felt ‘sick’ before collecting her results. The nerves were unfounded, however.

“I’m over the moon!” she said, revealing that she hopes to study Medicine.

Over in St Mel’s College there were several smiling students too, with Kelly Esezobor, who is aiming to study Economics in NUI Galway, stating; “I am very happy with my results - I thought I was going to fail English but I got a B2!”

Nathan O’Toole said he was “happy enough” with his results, while David McCarthy said, “I’m happy. I did a bit better than I thought!”

Sadly, there were also some students who were disappointed with their results. Nikolas Podgorny admitted he was hoping for better but will wait until Monday for the first round of CAO offers to see how he will proceed.

When asked if he was pleased with his results, Clayton Finn replied, “not really”, but pointed out that he aims to join the army as soon as they recruit again.

For more on Leaving Cert 2016, see this week’s Longford Leader.