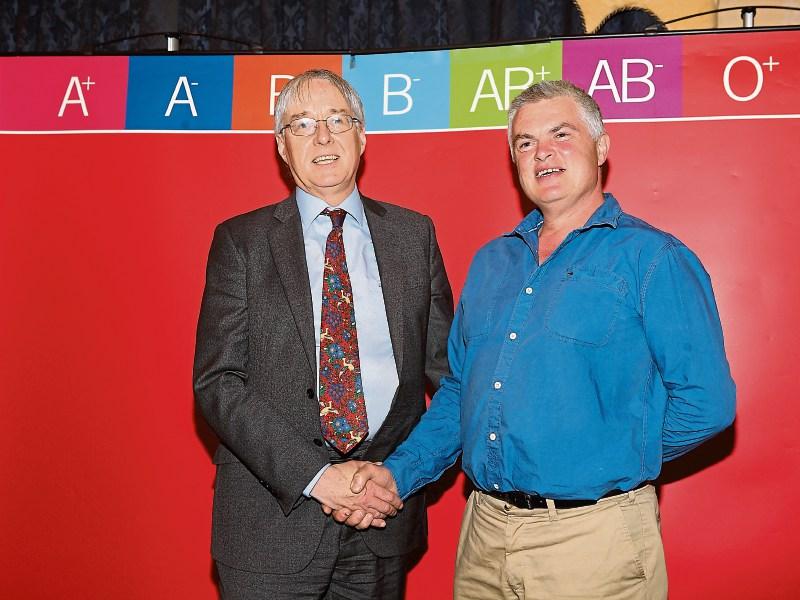 A County Longford man who has spent more than two decades donating blood  has vowed to keep up the practice until health or old age dictate otherwise.

Peter O'Sullivan made the pledge after receiving a 'Gold Drop' award from the Irish Blood Transfusion Service (IBTS) for reaching the 50 donation mark.

A couple of months on from securing the honour,  Peter said he intends continuing a custom that dates back to the early 1990s.

“I started 23 or 24 years ago when a friend of mine was giving blood.

“I went along withthem and I just kept on going because you never know when you might need it,” he said.

The father-of-three's compassionate approach to a tradition that all too often goes unnoticed is refreshing.

So too is his innate desire to see members of his own family follow in his footsteps.

“They (children) are going on 18 and 19 and they are now starting to talk about donating which is good,” he confided as he attempted to deflect the spotlight from his own achievements.

“A friend of mine is not too far off 100 (donations), you should be talking to him,” added Peter in a submissive manner.

“I'm not the only one donating, it's no big deal.”

Whether it is or not is very much open to debate.

One aspect linked to the broader blood donation debate that certainly isn't is the almost persistent call for existing and new donors to boost supplies.

Earlier this year the IBTS  underlined that need by revealing supplies had reached dangerously low levels.

The first call came in January with claims the country's hospitals had only three to four days of blood reserves left.

That was followed by a similar warning in March amid fears supply levels would not be maintained over the St Patrick's Day and Easter period.

Peter, who hails from Aughakilmore outside Bunlahy,  said it was those kind of soundings members of the public perhaps needed to hear in order to ensure adequate supplies are maintained.

“Giving blood is something you can do and doesn't cost you anything,” added the timber harvester.

“Some people have a thing about needles and they can't go for various reasons.

“But I started donating over in Loch Gowna and for many people it's an almost social event at this stage.

“I just hope I can keep on giving for as long as I can,” he modestly put it.

To find out about the next clinic or to find the nearest clinic to you,  contact the IBTS on 1850 731 137, check Aertel Page 691 or visit http://www.ibts.ie for further details.