Recalling some wonderful memories in Granard 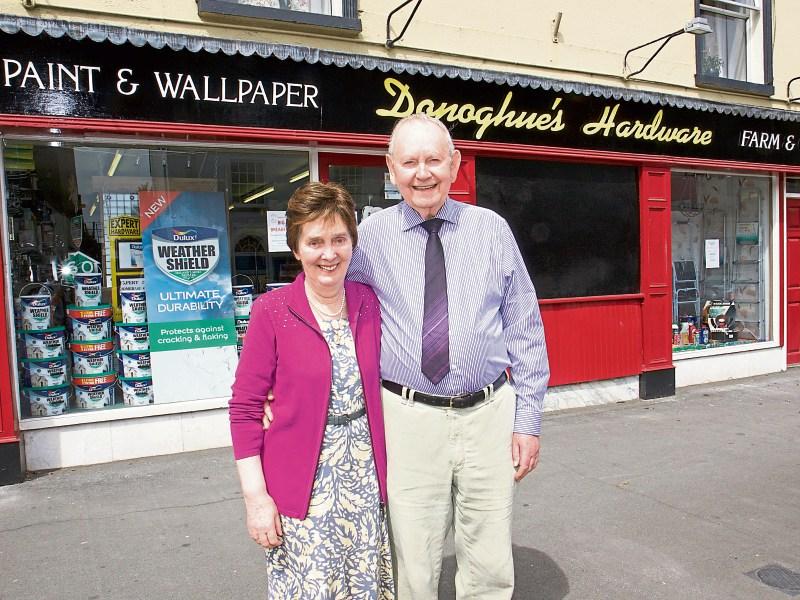 Donoghue’s Hardware has been a mainstay on Granard’s streetscape since  1968.

Throughout the decades, this well-known family business went from strength to strength, despite the economic challenges of the 1960s, 1970s, 1980s and from 2008 onwards.

This week, Edgeworthstown’s Quinn’s Supply Stores will take over the family business, and Jimmy Donoghue  and his wife Sheila - who have been married for 52 years - will finally take a well earned rest after 48 years serving the people of north Longford and far  beyond.

“Ah it was a good business, thank God,” said Jimmy nestling into his armchair at the fireside in the family’s sitting room, just above the shop, to chat to the Leader last week.

“I always liked the hardware business.”

In fact, Jimmy Donoghue was deeply involved in the Irish hardware industry over the years and served as president of the National Hardware Association in 1995/’96.

“I enjoyed that,” he recalled, before pointing out that he met “a lot of very nice people”.

“It was a nice trade to be in and I even received an award actually, two of us received the award including the late Terry Spillane, who founded the Irish Hardware Magazine which was published four times a year.”

He was also honoured by the organisation in 2009.

“I got a lifetime achievement award and that was something very special to me,” he added.

He is delighted to be handing over the business to one of the best known family-run enterprises in the county - Quinn's Supply Stores.

“Quinn's Supply Stores is a very good company and they are going to lease the business from us,” Jimmy explained.

“They will also bring the building side of things into the business and that is something that we didn’t do; in fact I think that this change will be good for Granard.”

He feels Granard has successfully weathered the ill-winds of the economic downturn.

“In fact, it was brought to my attention recently that not one job was lost at either Pat the Baker or Kiernan Milling during the last recession and that both companies created even more employment.”

Sitting chatting to Jimmy, it becomes very apparent that his heart is in everything ‘Granard’.

A former town councillor for the area, he was fortunate to be in a position where he presided over a town that was becoming more and more industrious as time went on.

In fact one of the things that brings him much satisfaction is the number of businesses in Granard that, like his own, began from humble beginnings and went on to blossom in the years thereafter.

Again, Pat the Baker and Kiernan Milling are two such companies that spring to mind for Jimmy as he recalls the previous years.

“One of the very first things I ever became involved in was Granard Agricultural Show and I remember the late Tommy Quinn - I was assistant secretary to Tommy back in 1953, and I was just after finishing in the Tech [Ardscoil Phádraig],” the local businessman continued.

“Tommy was a great character - he was involved in a lot of things around here and did a lot for the town.

“Both he and Tommy Kiernan built the Granada then - what a wonderful achievement that was and something that was ahead of its time, and it right here in Granard.”

The Granada brought the showband era to life in Granard and so many of the legends of that time - including the town’s very own Larry Cunningham - rocked that stage throughout the 1960s and 70s.

“Those two men also built the mart, they were great men.”

Later a development association was established in the north Longford town and a cinema opened up.

Stegans also established itself there and then Seán Quinn invested  in Granard when he took over Lite Pac.

“And we can’t forget the Buddy Kiernan of course and the Mill - now one of the biggest in Europe, and also here in Granard; the family are actually building a second mill out there at the moment, and sure without Pat the Baker there wouldn’t be a Granard at all!” smiled Jimmy as he reminisced fondly by the fireside.

“When Stegans went, five of us here in Granard backed another enterprise, unfortunately it didn’t work out, but the fact that the town backed that second factory was a source of great pride to people in the area,” he continued, before pointing out that overall, Granard is a town that has achieved much.

“This is a great town; people are wonderful and there is a wonderful sense of community - that is not just Granard though - there is that sense from Mullahoran and Finea to Mullinalaghta and Abbeylara, all the surrounding areas.”

In 1964, Jimmy married Sheila and together the couple had three sons - Joe, Seamus and John.

Joe died tragically in a car accident nearly 24 years ago and John continues to work alongside his parents in the family business.

“Seamus is a Managing Director with Dulux Paints in Dublin and doing well for himself thank God,” added Jimmy who then moved on to chatting about his adored grandchildren.

“We have three grandchildren and we are very proud of them.”

For Jimmy though one of the lasting memories he will have of Granard is the famous Harp Festival which saw crowds descend on the north Longford town from all over the world.

In the 1970s and throughout the 1980s, it was  a magical time for local children, who donned either their Scór attire, dancing costumes or club jersey to march proudly and participate in the main event which was the massive parade up the town on the Sunday of the event.

The Harp Festival was, as Jimmy recalled, “something special”.

“Everyone from Granard and the surrounding areas got involved in the Harp Festival and it was an absolutely wonderful occasion,” he smiled before pointing out that it went on to earn the prestigious title of ‘Bun Fleadh’ [first Fleadh Cheoil] after the first ever event was established at the Market House in the heart of the town in 1781.

“Granard is a very old town and the Harp Festival represented all the traditions of the area - from great music and dancing to writing and song.

“St Patrick came to Granard and the first Irish Bishop was the Bishop of Granard.”

“Then of course we had Pauric Colum, another famous author and some people say that ‘She Moves Through the Fair’ was in reference either to the fair in Granard or Arva.

“Nowadays we have Noel Monahan, the poet.”

The recent 1916 Commemorations gave everyone the opportunity to delve into the history books and re-examine the role of Granard in the Rising.

The love affair between Michael Collins and Kitty Kiernan is well known, but the restoration of Larry Kiernan’s car for the Commemorations earlier this year, has put Granard firmly on the historical map again.

“Larry brought a first cousin of his - Paul Cusack who owned a drapery shop in Granard - and John Cawley who worked at the local creamery here in the town, to Dublin for the Rising in that very car,” said Jimmy.

“They couldn’t get in on that Easter Tuesday of 1916 when they got to the city and were turned back - none the less, Larry went up with them anyway.

“Paul Cusack worked with Collins in the GPO in London and Cusack is the man who can be credited with being the first person to bring Collins to Granard.

“Brendan O’Reilly - another great Granard man - wrote a ballad about Collins and actually gave the oration at Beal ná mBláth one year.

“Brendan would claim that the first time Collins came to Granard he stayed in Flood's, the building of which is now part of McBrien’s supermarket.”

Jimmy then recalled the great show jumper Eddie Macken who brought acclaim to Granard  with his brilliant wins at famous horse shows across the globe.

“I remember Eddie jumping at the Granard Show on ‘Granard Boy’, a pony that his father bought him,” smiled Jimmy recalling the memory.

Looking back through time, and bringing all his memories to the fore, it's his family and the friendships he made that now hold most of the space in his very big heart.

“I made great friends all over the country and there are great people in this area - that makes me happy.

“There is a younger generation coming along now and they organise the Easter Festival and Christmas Lights, etc and they are fantastic young people - in fact that is one of the things that I am most proud of in this town - the young people, their involvement and their abilities.”

The baton has been passed on but Jimmy clearly will remain at the heart of Granard, and Granard will remain in his heart as he enters his retirement and begins a new chapter in his life.