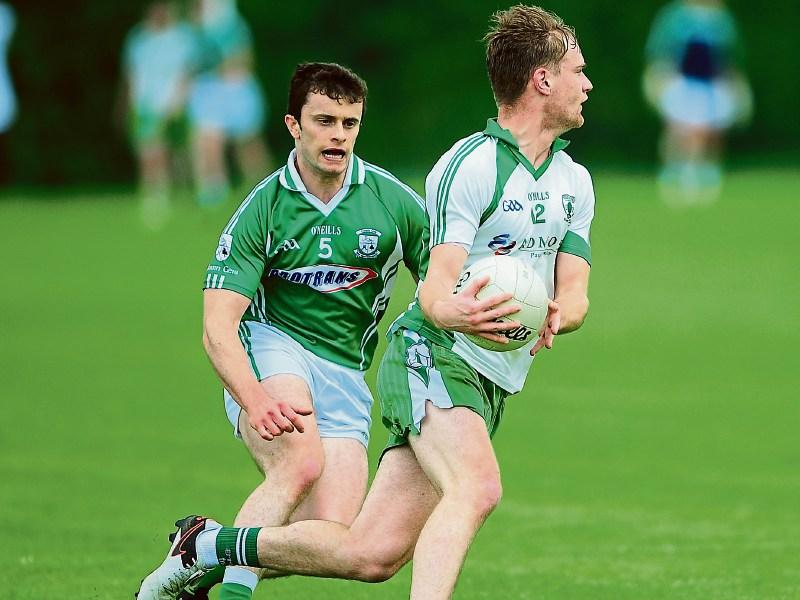 Showing the greater will to win throughout this highly entertaining Senior Football Championship first round clash at Devine Park on Sunday last, Clonguish produced a great second half display to eventually get the better of the title holders Killoe Emmet Og.

It was no more than Clonguish deserved as they clocked up the magnificent total of 21 points (13 from play) and ironically neither of the Barden brothers, Paul and David, managed to get their names on the scoresheet.

Having said that, both played a prominent part in this surprising win that puts Killoe under a certain amount of pressure going into their second round fixture in Group 1 against Longford Slashers on Sunday next but Declan Rowley’s side are still strongly fancied to qualify for the quarter-finals.

While chief marksman Joe O’Brien made a big contribution to this impressive Clonguish win in shooting over a total of nine points (eight frees), it was the other corner-forward Ciaran Williams who made a major impact on the changeover.

The deadly accurate Williams kicked four excellent points from play in the second half in ending up with 0-6 and he was a constant threat whenever he received the ball.

The introduction of influential substitute Paddy Dowd in the 41st minute made a significant difference and another replacement Shane O’Brien (brought on at the same time) also showed up well as the game gradually swung in favour of Clonguish.

While Killoe sorely missed Sean McCormack in attack, with injury also ruling out another key forward Denis McGoldrick, a goal from Michael Quinn in the 6th minute gave the county champions the perfect start and they ended up leading by 1-9 to 0-9 at the break.

The main man for Emmet Og in the first half was unquestionably Mark Hughes, who fired over six points (four frees) and also created the goal chance for Quinn who flicked the ball to the net from a few yards out.

Their other points came from Daniel Mimnagh (free), Quinn and Paddy Kiernan while Joe O’Brien converted five frees for Clonguish who went so close to scoring a goal in the 24th minute when Paul Barden shot narrowly wide.

Also on target for Clonguish in the first half were Peter Hanley, Colin Farrell and a brace from Ciaran Williams (all from play) but it was Killoe who still held the upper hand in the early stages of the second half as they registered three more points - a brace from Mark Hughes (play and free) with Michael Quinn also shooting over the bar again.

That left Emmet Og leading by 1-12 to 0-11, with Joe O’Brien (free) and David Faughnan getting the scores for Clonguish and still very much in contention with the wind in their favour in the second half.

What happened next was real quality for the large attendance to savour as Clonguish enjoyed a glorious spell between the 41st and 54th minutes that yielded seven points in a row - four from the game changer Ciaran Williams with Joe O’Brien landing two more scores (play and free).

Shane O’Brien also kicked a point as a stunned Killoe outfit now trailed by 0-18 to 1-12 before they eventually closed the gap when Michael Quinn landed a free over the bar in the 57th minute.

But Clonguish were in no mood to let a most notable victory slip from their grasp and wing back Darren Quinn raced through to fist the ball over the bar before Joe O’Brien converted  another free.

A point apiece were exchanged between Paddy Kiernan and Paddy Dowd (a terrific strike) in stoppage time as Clonguish ran out fairly comfortable winners in the finish.