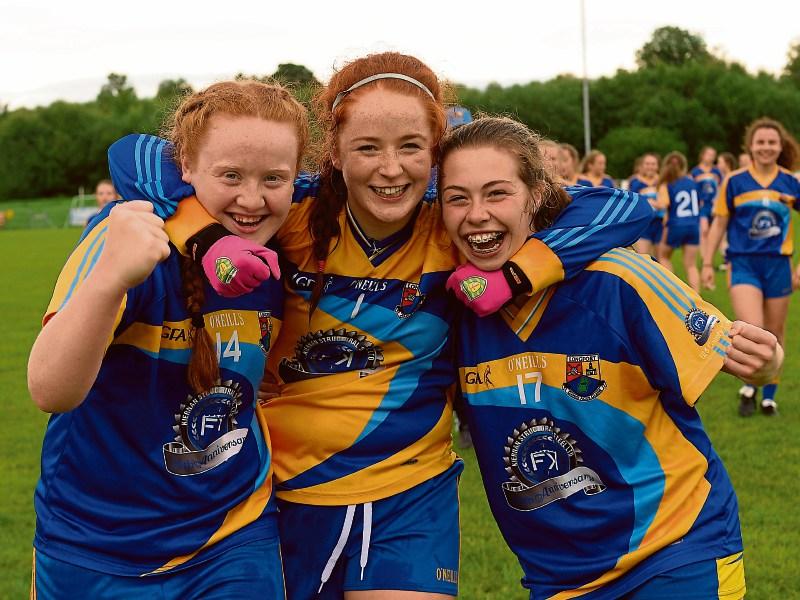 A stunning display from Longford’s U-16 girls saw them overwhelm Derry by thirteen points, 9-5 (32) to 3-10 (19), and capture the All-Ireland ‘C’ championship title at Fr Hackett Park in Augher, Co Tyrone on Wednesday evening last.

When the county ladies savoured an All-Ireland success at Junior level back in 1997, Dara Gill captained Longford to glory and the Drumlish native, now McGann, guided her talented young charges to this wonderful victory. Team manager Dara was assisted by other mentors Michael Mulvey and Sinéad Macken.

Exchanges were competitive during the opening quarter and the sides were level twice, however, after Longford got their first goal in the 16th minute, to put them ahead for the first time, and they gained a firm stranglehold on matters and didn’t relinquish it.

That opening goal arrived after a terrific flick on from Jessica Barry to Niamh Brady with the Killoe girl blasting  the ball to the net.

Less than a minute later Cliodhna Allen got her side’s second goal to put five between the sides. She then added a point before Longford missed a few opportunities to extend their advantage.

Under pressure Derry’s only response was a pointed free from Eve Diamond.

Longford netted their third goal in the 26th minute as Ciara Foxe hit the target. Ciara Healy swiftly added a point before the impressive Foxe netted her side’s fourth goal in the 29th minute.

Things got even better for Longford in the 30th minute when player of the match Aisling McCormack carved through the Derry rearguard and dispatched goal number five. The young Ballymahon girl was immense throughout.

Erin O’Neill fired over a point as Derry trailed Longford 5-4 to 0-5 at half-time.

Derry substitute Clodagh Laverty landed the first point of the second half but Longford replied with a lovely point from Jessica Barry after good play from McCormack. In the 34th minute Healy caught the Derry keeper unawares as she grabbed Longford’s sixth goal.

Despite being behind by seventeen points, 6-5 to 0-6, Derry still had plenty of fight in them and they reeled off two nice points in quick succession.

Longford though were clinical in attack and Niamh Brady got her second goal of the game in the 39th minute.

Down at the other end, Derry pulled a goal back but Longford’s reply was superb; another goal from Brady.

Derry though didn’t give up and they were rewarded with a second goal in the 45th minute and they were then awarded a penalty one minute later but Diamond had the misfortune of sending  her shot wide.

Longford corner-back Sarah Horan was sin-binned in the 47th minute and with numerical advantage Derry hoped to eat into Longford’s lead.

Jessica Barry, who was switched from attack to defence, twice excellently blocked Grainne O’Neill’s shot  as the Oak Leafers went in search of another goal.

In the 50th minute Anna Martin got Derry’s third goal.

Although Longford still held a comfortable twelve point lead Derry were intent in cutting the deficit. They continued to create chances but were thwarted by fine goalkeeping from Sara Lee Greene and terrific defending from Jessica Barry.

Derry hit over two late points but it only served to put respectability on the scoreboard as Longford were deservedly crowned All-Ireland U-16 'C' winners.