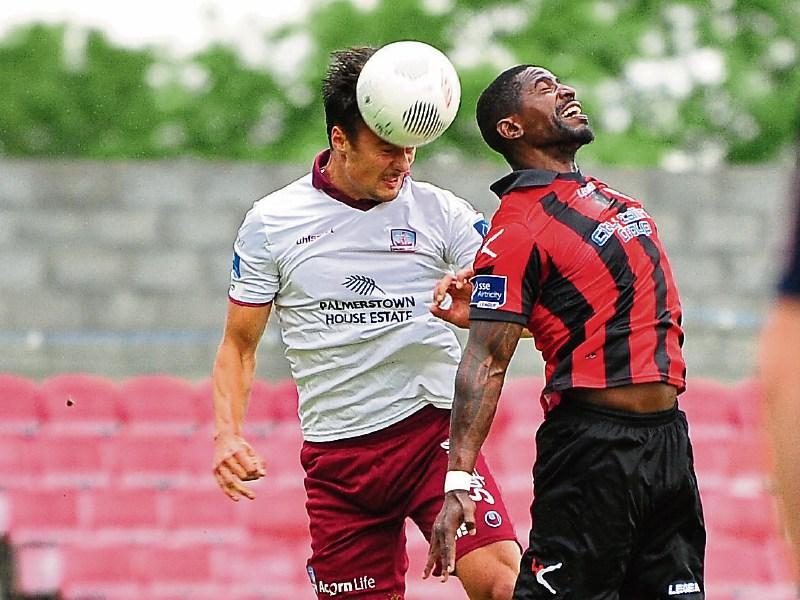 After 21 games in the Premier Division this season you would have expected Longford Town to finally find a way to tighten up at the back and not concede soft goals.

But at City Calling Stadium on Saturday night last their defensive frailties were once again exposed as they allowed Galway United to come away with a draw.

The Town had taken the lead in the 53rd minute through a superbly hit volley from Kaleem Simon, connecting with a pinpoint cross from Noel Haverty, but 14 minutes later the visitors were back on level terms.

Eddie Dsane fouled Kevin Devaney on the edge of the box; Ryan Connolly stepped up to hit the free-kick but played the ball short to the unmarked Paul Sinnott and he made no mistake in finding the net.

Both sides had chances to claim the win with Longford coming so close in stoppage time but Galway keeper Conor Winn denied Lee Duffy.

Although his side are five points adrift at the bottom of the league table, with a -30 of a goal difference and only one win this season (in the opening fixture away to Wexford Youths), Town manager Tony Cousins believes his side can somehow avoid relegation.

“I think anybody and any supporter that was here tonight will certainly go home believing that we can. Because our performance showed that we are capable of it. If we keep the level of performance against Galway, we can certainly stay in this division,” stated the optimistic Cousins.

It may have been an improved performance from the Town but the same problems are there; they cannot keep a clean sheet and continue to squander scoring opportunities. The Town boss believes his side’s fortunes can change: “I believe you have to be playing well. Tonight we did play well and created chances. On another night they would have gone in for us. They will but we will need to produce that level of performance in every game until the end of the season.”

As the fight for survival continues for Longford Town, the need for a leader and a real driving force is more evident each week. Will the club rue letting Stephen Rice go because his battling endeavour has not been replaced in the midfield sector! Though Cousins feels the new signings he brought in recently have made a difference.

“We are looking a lot better as a team. The players that I brought in during the July transfer window have strengthened us where we needed to strengthen. I think we are in a place now that we can kick on. You got to believe that if we play like we did against Galway that there are wins in the team.”

The Town created several chances in the first  half with Dsane coming close in the 30th minute but his effort hit the crossbar. Don Cowan then blasted over while Galway’s only chance in the first half was Kevin Devaney’s shot just before the break.

Seven minutes into the second half, Cowan forced Galway keeper Winn into saving with his feet and one minute later the home side took the lead through a well struck Kaleem Simon volley.

That goal forced Galway into upping their game and in the 67th minute they got the equaliser when Sinnott hit the target.

Both sides went looking for a winner with the Town coming close in stoppage time when David O’Sullivan’s perfect pass picked out Lee Duffy but he was denied by a Winn save.

Despite just picking up a point Cousins is still hopeful: “The way it is it’s a long season and there are a lot of matches to go, a lot of football still to be played. If we stay in the mix with six games to go that’s when the heat will really start on teams in the bottom end of the table.”