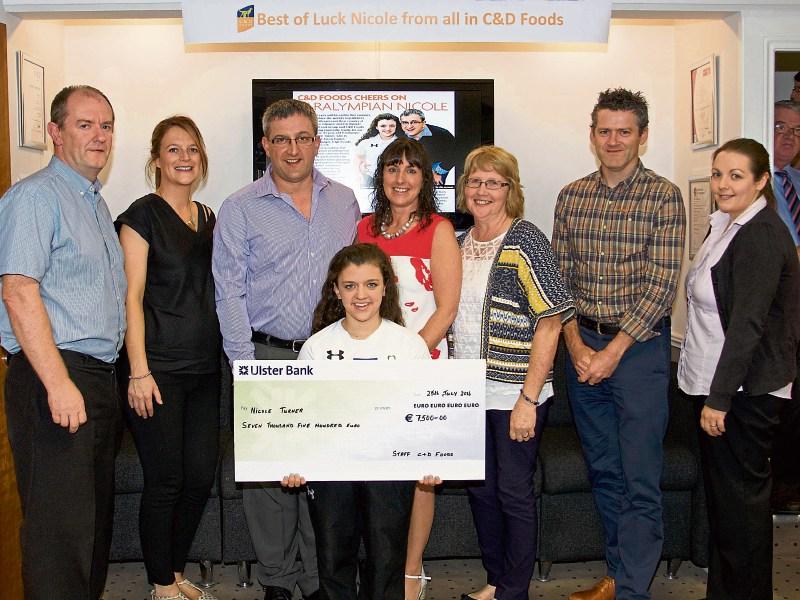 From September 7 to 18 the Paralympics will take place in Rio and staff at C&D Foods in Edgeworthstown and Mullingar have been busy fundraising so that their colleague’s daughter can make it there to represent Ireland in the swimming competitions.

Earlier this week, staff at the company presented Nicole Turner (13) with a cheque for €7,500 after a monster fundraising effort by staff, suppliers and partners saw thousands raised in the paralympian’s name.

Nicole’s father Jason is the warehouse manager at C&D Foods and after it emerged that the youngster had qualified for the famous competition, thinking caps were put on and a huge effort was made by all.

On Monday, the Turner family were welcomed to a celebration afternoon at C&D where Joe Daly announced that Nicole was the first ever olympian to visit the facility on the outskirts of Edgeworthstown.

“As colleagues of Jason, we decided to do do something that would help out with Nicole’s endeavours in the Olympics,” he added.

“There is a lot of expense involved, so we got everyone together and held a Monster Raffle; we are proud to do what we did and we really hope this helps out.”

Speaking in Edgeworthstown on Monday following the presentation, Nicole’s mother Bernie said that it was “phenomenal” what staff at C&D had achieved on behalf of their daughter.

The family - who hail from Portarlington in Co Laois - said they were amazed by the support Jason had received from his colleagues.

“We are very proud that Nicole will be carrying the Tri-colour and representing Ireland in Rio,” continued Bernie before pointing out that everyone remained hopeful that their talented daughter would achieve her personal best there.

Smiling proudly, Jason told his colleagues that Nicole had been swimming since she was seven-years-old and the family alway hoped that she would be set for Rio 2016.

“She is doing fantastic and can only get better.”

With regard to the Paralympics, Nicole is one of the youngest squad members and has progressed onto the senior Paralympic swimming scene having started in her local club, Laois Marlins.

She first saw international success early on in 2015 when she won a silver medal in the Youth Category at the British International in the 50m Butterfly - her first meet representing Ireland at a senior level.

Nicole went on to compete in her first major senior international championships at the 2015 IPC Swimming World Championships in Glasgow, where she competed in six events in her S6 class, making the final of each and also setting a new lifetime best in every single one.

She represented Ireland again at the 2016 IPC Swimming European Open Championships where she swam in six finals, bringing home silver in both the 200m Individual Medley and the 100m Breaststroke as well as a bronze in the 50m Butterfly.

So amid much cheering in Edgeworthstown on Monday  staff gathered to enjoy some  time out with Nicole while indulging in some wonderful homemade  treats to give Nicole a super send-off as her final preparations begin.