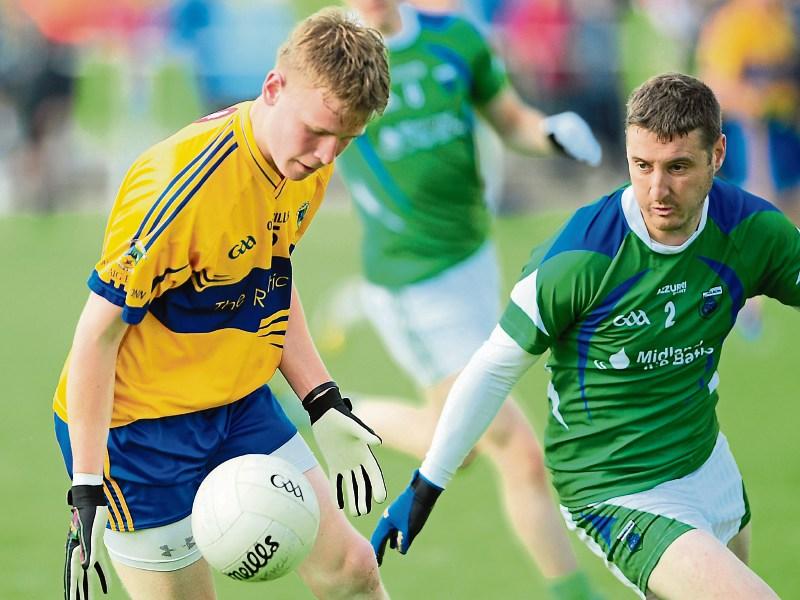 Carrickedmond were in complete control as they cruised to a very easy victory  over a poor Rathcline side in the Senior Football Championship first round game at McGann Park in Kenagh on Sunday evening last.

Rathcline, minus the services of Liam Connerton who left for America after the defeat to Cork in the All-Ireland Qualifiers, could not match Carrickedmond’s speed or intensity in falling to a heavy defeat.

Carrick's sharp play and fierce tackling were the core to a good win with stalwarts Kevin Moran, Barry O'Farrell, John O'Shea and Marty Mulvey leading from the front. But the landslide nature of the victory might not necessarily reflect on Carrick's brilliance but more so on a very disappointing Rathcline side.

Marty Mulvey kicked over two fine scores for Carrickedmond in a good start before Shane Kenny got his first point from a free to open Rathcline's account.

Barry O'Farrell kept two between the sides with his score which was replied by James Hanley from a free. Carrick's dominance of kick-outs and the powerful presence of Barry O'Farrell and John O'Shea at midfield was causing Rathcline problems and with quick and direct play Ger Carberry’s side put a further 1-2 up on the board.

Keith McGuire slotted over a free before the impressive Marty Mulvey was in again after good build-up. Then John O' Shea straight from the kick-out burst his way through the Rathcline defence and blasted a shot past the opposing keeper David Mulvihill.

Rathcline replied with good scores from Shane Kenny and James Hanley but they could never get on top and Carrick looked set for victory at the interval following a further three points from Jonathan Keegan, Johnny Gerety and a Keith McGuire free to hold a commanding 1-8 to 0-4 lead at the break.

Things went from bad to worse for Rathcline who failed to register another score until stoppage time in the second half. James Hanley receiving a short free and duly tapping the ball over the bar for what was their only score from play.

Carrickedmond doubled their first half score on the changeover in adding a further 1-8 to their most emphatic tally, the goal coming from brilliant centre-half-forward Marty Mulvey who ended up scoring 1-6 in total.

Rathcline will have to improve greatly for their next game against Ballymahon this Friday evening and their manager Colin Hannify has a lot of work to do in a bid to raise the spirits of his now surely disheartened side.

Carrickedmond now face probably their most difficult task in Group 3 against Mostrim at Keenan Park, Ardagh on Friday evening and are at a disadvantage with the 5-Day turnaround whereas the Edgeworthstown side had a bye in the first round.