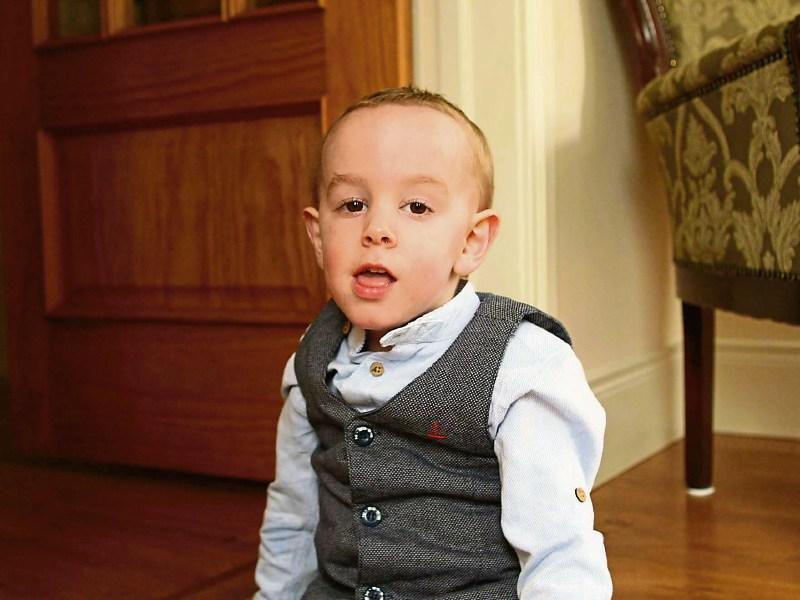 Three-year old Tom who hails from Kilskyre, Kells, Co Meath has strong links to Longford as his aunt, Carrie is married to Granard native, Philip O’Hara.

Son of Derek and Nikki, Tom was born with  Hypotonia, a condition that affects his upper and lower limbs leaving him unable to walk or talk.

He currently attends physiotherapy in Limerick but the family’s aim is to raise enough money so they can buy the necessary machines and equipment to provide care to Tom in the family home.

The long-term effects of hypotonia on a child's development and later life depend primarily on the severity of the muscle weakness and the nature of the cause.

Speaking to the Leader, Tom’s mother Nikki said that her son’s condition means that he is unable to walk or talk at the moment.

“It is a lifelong condition,” she added, “and treatment includes intense physio.”

It is a private facility that provides Tom with the care he needs, however its location means that Nikki and Tom leave the family home on Monday morning and do not return until Thursday.

Derek and Tom’s two siblings Charlie (9) and Lucy (7) man the fort back in Kells in the meantime.

“Our aim through the fundraising is to purchase all the necessary equipment that we need so that Tom’s condition can be managed at home,” Nikki continued.

Nikki also went on to say that her son had made great progress since beginning treatment at the clinic in Limerick and it would take approximately three years for him to reach the stage where he could possibly be ready for surgery in the States.

Meanwhile, Philip O’Hara said that this weekend’s fundraiser at the Park House Hotel in Edgeworthstown - which is being headlined by Chuck and June - would guarantee a great night out with all proceeds going towards the Tom’s Walking Wish campaign.

A raffle will also be held on the night with some very valuable prizes up for grabs including a  two nights B&B and evening meal in Cassidy's Hotel in Dublin and a family weekend in Castle Hamilton Estate in Cavan, to mention but a few!