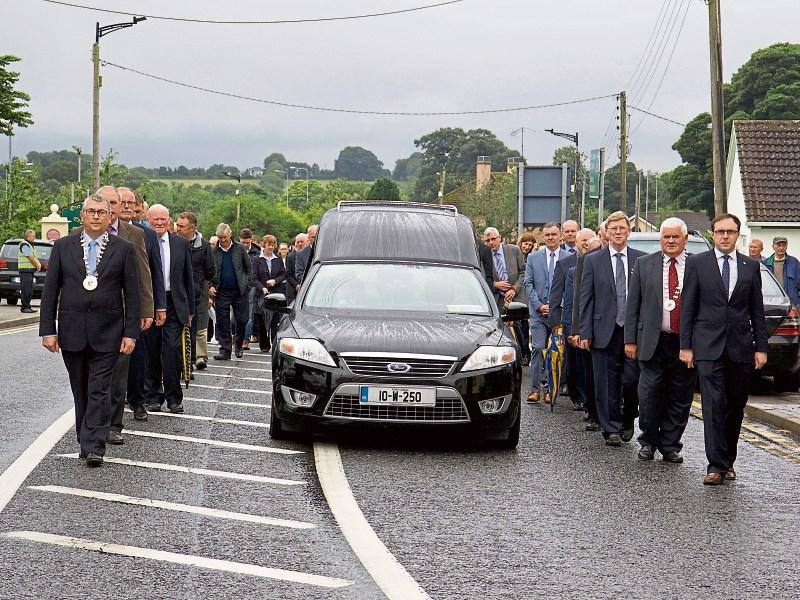 “He was just an honest, true gentleman.”

These were the words of former county councillor Barney Steele this week as he led tributes to his long time friend and colleague  Jimmy Coyle who passed away on Tuesday, July 19.

Mr Coyle, a Fianna Fáil Councillor for over three decades boasted an unblemished political record of emerging victorious in every local election he stood in.

“He was my mentor,” said Mr Steele. “If you ever wanted advice and many times I picked up that phone for that advice, Jimmy was always the man I would ring.”

Mr Coyle, of Cranley, Mostrim, was first elected to  Longford County Council in 1974.

A farmer by trade, the father-of-seven was widely regarded by his fellow peers as one of the county's more adept, though understated,  political performers.

That critique was probably best summed up during an interview Mr Coyle conducted with the Leader ahead of the 1979 local elections.

Asked about his long term political aspirations, Mr Coyle replied simply: “I went into politics in 1974 to be a good representative for local people - I've no further ambitions.”

“Everything Jimmy did he excelled at,” added Mr Steele. “Edgeworthstown was his town and he delivered plenty for it.”

The arrival of animal feed manufacturer Paul & Vincent to the town was one such accomplishment, according to Mr Steele. Other achivements, from the upgrading of Edgeworthstown Fire Station to the construction of a new sewage scheme were just as notable.

A devout  farming campaigner, many credited his strong working relationship with former Taoiseach Albert Reynolds as one of the reasons Reynolds set up C&D in Edgeworthstown.

Offering his condolences to Rosemary Coyle and her family, former Fianna Fáil TD Peter Kelly said that it was a pleasure and an honour to serve on the County Council with Jimmy Coyle and to work with him politically throughout his career.

"He was a straight, honest decent and loyal colleague and he was a man of  impeccable character," Mr Kelly said. "He was very cool and calm and he was always a politician with great common sense."

Mr Coyle stepped down from local politics ahead of the 2009 local elections, paving the way for his eldest son, John to run in 2014. However the new boundary did not suit John and he failed to secure the seat.

Jimmy Coyle was fiercely proud of his family’s roots in Fianna Fáil.

“The whole family were all very active members of the Fianna Fáil party right back into its foundation,” said long time party colleague Benny Reid.

Mr Reid spoke of Mr Coyle's close political relationship with Albert Reynolds and the deep devotion he had for his family.

“A lot of us would often say different things to Albert and he would say 'Yeah, yeah, sure, but was anyone talking to Coyle'”.

“That was the esteem in which he was held.”

Offering his sympathies to Jimmy Coyle's “loyal and loving” family, Fianna Fáil TD for Longford Westmeath, Robert Troy added; “He was certainly someone that a young politician could look up to for his work ethic, his dedication to public service and his integrity in the manner he carried out his public duties.”

His Funeral Mass was held on Sunday in St Mary's Church, Edgeworthstown with burial afterwards in Aughafin Cemetery.