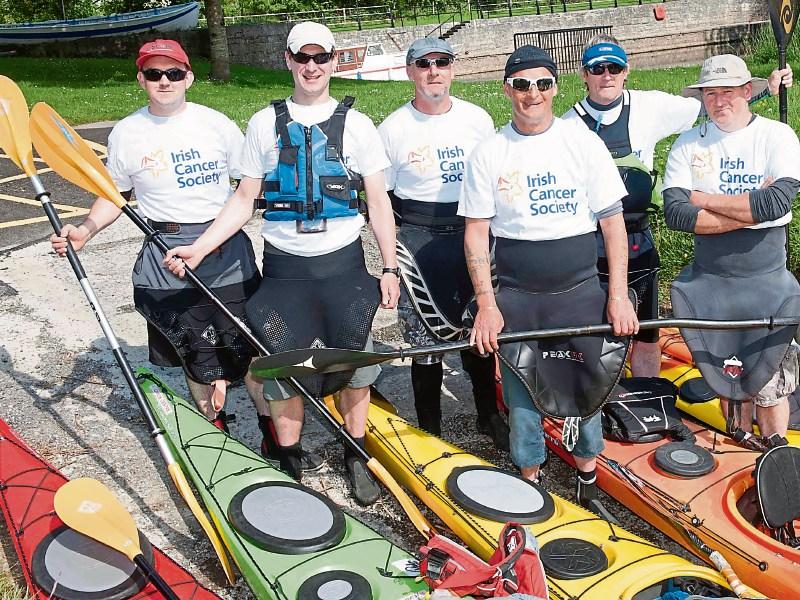 Junior Hannon from Ballyleague recently fulfilled a lifelong ambition by kayaking along the Shannon from Lanesboro to Limerick to raise money for the Irish Cancer Society.

Along the way, they raised an impressive €4,800 for the charity.

One of the most striking aspects of the trip was the amount of support they received along the way from local clubs and individuals who just wanted to lend a hand.

Junior was joined on this endeavour by Seamus Irwin, Roy Glennon, Niall Madden, Chris McDaid and Fergal Brazil and he says that they were thrilled to receive such a warm send-off from the local community when they set off  on their three day trek.  There was a stop in Quaker Island for a quick cuppa before they headed to Athlone to be escorted into the town by the Athlone Sub Aqua Club.

“We were totally overwhelmed by their kindness,” Junior told the Leader.

The group set up camp in Clonmacnoise before heading to Shannonbridge where they were greeted by members of Ballinasloe Civil Defence.  After a short break, they travelled to Banagher where former Longford News reporter Jonathon O’Meara was there to greet them with members of the Shannonside Sub Aqua Club.

One of the many acts of kindness they encountered along the way was upon their arrival in Portumna, they discovered their van had broken down and George Smith had waited for three hours minding their equipment.  Junior also thanked Liam Sherringham for ensuring smooth passage with the lock keepers along the way  throughout the trip.

“We want to say a big thank you also to Seamus Glennon and Mick King for transporting crew and gear and thanks also to Eugene McEntee who supplied meat for the BBQ and to Shauna Hannon who supplied the curly wurlys!” Junior added.

After camping in Killaloe on Day 2 before heading to Parteen Weir where they met a man who told them he was a cancer survivor.

“I felt very humbled by this gentleman,” Junior admitted.

A man named Pat Lysaght guided them through Ardnacrusha and onto to Limerick City into Sarsfield Bridge.

“We would like to thank everybody who supported us on this wonderful journey,” Junior concluded happily.