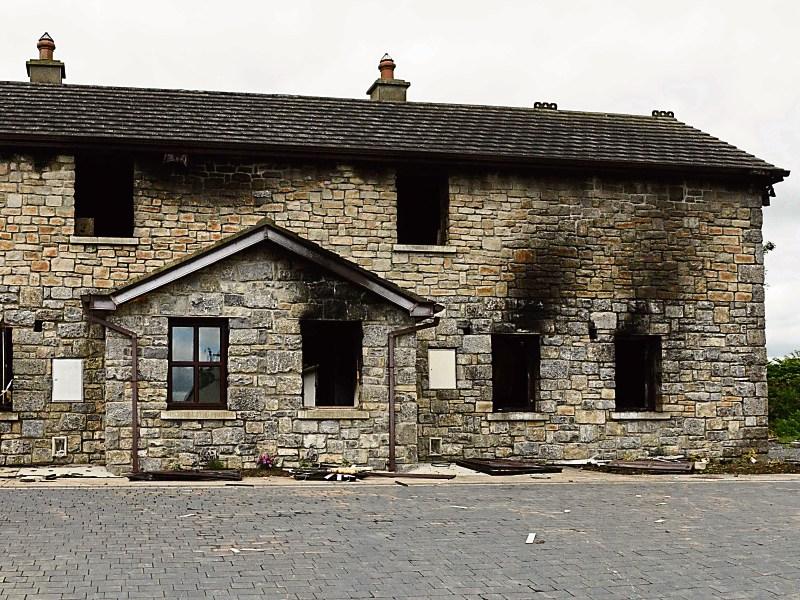 By Alan Walsh
The owners of a public house in the village of Newtowncashel, Co Longford said they are ‘devastated’ after four houses they had built at the back of their premises were severely damaged in a suspected arson attack overnight.
Gary and Síle Mulvihill are proprietors of ‘The Local’ pub, which re-opened in Newtowncashel at the end of March in 2015, and Gary told the Leader, “I’m devastated but as the day goes on, we are relieved that no one was killed or injured.”
Units of the fire service from neighbouring Ballymahon and Lanesboro tackled the blaze which is understood to have broken out sometime between 5 and 6am.
Síle explained, “At 5.55am, one of our neighbour’s rang us. We live two miles down the road. The parish priest heard a loud bang at around 5.30am and he rang the fire brigade. Then he was trying to contact us but he didn’t have our number. So he rang a couple of our neighbours and they eventually got Gary. So he came up at around 6am and it was gone at that stage.”
Síle suggested the incident was ‘malicious’, while Gary added, “Whoever did this broke into every individual house and doused every room with petrol, a number of gallons of petrol.”
The couple say they are determined to bounce back and that they will rebuild the severely damaged houses, none of which were occupied at the time of the fire.
They also pointed out that ‘The Local’ will be open for business this evening, Thursday, as normal.
Gary and Síle thanked the local community for rallying around them and for their messages of support, and they also thanked the Gardaí and fire service for their assistance.
Gardaí remain at the scene of the incident and they are appealing for anyone who may have witnessed anything suspicious in the area to contact them at Longford Garda Station on 043 33 50570.