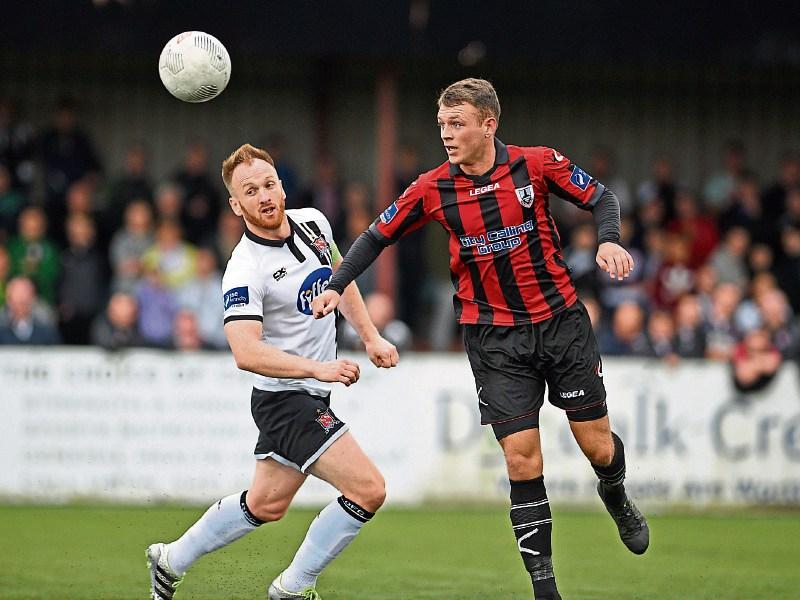 Three times Longford Town fought back in the Premier Division game at Oriel Park on Tuesday night of last week and looked like earning a precious point in the fierce battle to avoid relegation.

But Dundalk snatched a last gasp winner in stoppage time  when substitute Ciaran Kilduff found the back of the net in what was a shattering blow for brave Longford Town in their determined bid to cause an upset against the reigning league champions.

Just like last season, the Town put it up to Dundalk but unfortunately weren’t able to come away with anything. It’s frustrating for supporters to see this much improved performance and wonder where it had been for the last number of games. But moral victories won’t put points on the table.

David McMillan scored a hat-trick for Dundalk but on each occasion the Town drew level with Lee Duffy, Noel Haverty and Rhys Gorman getting the goals.

As full-time approached it looked like bottom side Town would get a draw but Kilduff headed home a Daryl Horgan cross to claim the three points for table toppers Dundalk.

Longford set their stall out early, playing five at the back to try and thwart Dundalk. The home side started well and in the 11th minute they broke the deadlock. McMillan connected with a Patrick McEleney cross to direct a powerful header past Town keeper Paul Skinner.

Dundalk created chances after that but couldn’t add to that goal. The Town themselves tried to play some constructive football but still remained defensive. Against the run of play Longford  drew level in the 35th minute; Lee Duffy won a corner off Dundalk defender Andy Boyle and the kick was taken by Kealan Dillon with Duffy finishong to the net from close range.

Just before half-time Dundalk tried to create chances to regain the lead but couldn’t get that second goal. Four minutes into the second half  the home side got that second goal; McMillan heading home Sean Gannon’s cross.

Once again the Town tried to get back on level terms and they did just that in the 55th minute when defender Noel Haverty got his head onto Dillon’s corner to hit the target for the equaliser.

It was all action at this stage and seven minutes later  Dundalk went ahead for the third time when McMillan got his hat-trick. McEleney’s wonderful cross met the head of McMillan and he directed the ball past Skinner.

Three minutes later the Town keeper pulled off a terrific save to deny McEleney. Down the other end another set piece from Dillon troubled Dundalk but no Town player was able to apply the finishing touch.

In the 74th minute and for the third time Town levelled matters. It was another Kelan Dillon set piece and this time his free-kick was eventually turned into the net by defender Rhys Gorman.

Longford very nearly went ahead shortly after when Kaleem Simon charged down a clearance from Dundalk keeper Gary Rogers but the ball went the wrong side of the post. Dundalk got the ball into the Longford net again in the 82nd minute but it was ruled out for offside.

As the clock ticked down Dundalk went in search of a winner with the Town hoping to catch them on the break. Darren Meenan had a corner cleared before Kilduff shot over.

Deep into stoppage time, Dundalk got a dramatic  winner when CiaranKilduff headed home Daryl Horgan’s cross in what was a most agonising defeat for gutted  Longford Town.