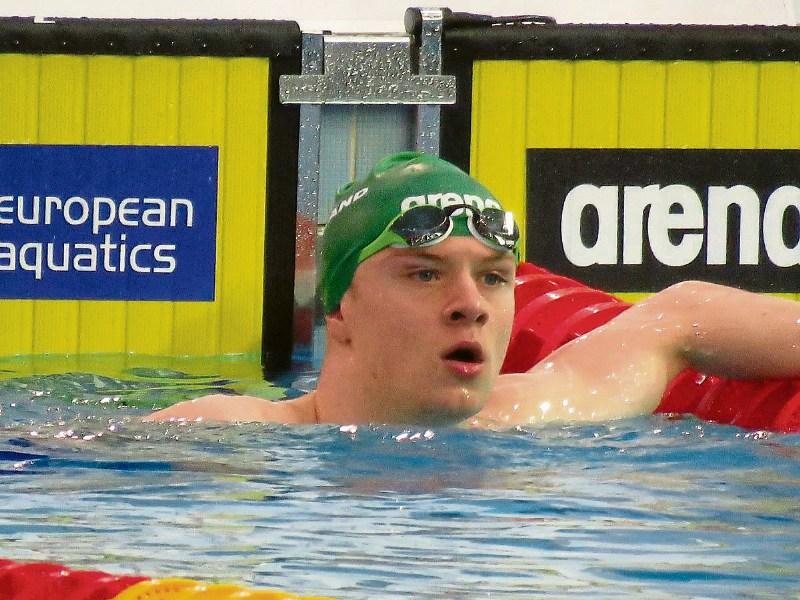 Gerry, coached by Ronan McNevin, completed his freestyle leg during the Mixed 400m Medley Relay Final on Saturday evening in a time of 49:4, with the team setting a new Irish Senior Record of 3:54.09.

Speaking after the final, a thrilled Gerry remarked, “It was great to get out there and race as a team, we’re really happy with the record. My aim was to break 50 seconds in the relay and I did which was great.”

He added, “It’s my first time at a big meet; it’s been a different experience, a bit overwhelming. I’m happy I was able to go out and swim fast in all of my races, it’s such a high standard here.”

Gerry finished 7th in that final in a time of 50:00 and quite remarkably, that was his third occasion in just over 24 hours at the Dezso Gyarmati Swimming Pool in Hódmezővásárhely to break his own Irish Junior Record, which prior to the European Championships, was 50:41.

Also, the holder of the Irish 200m Freestyle Junior record, 1:50.85, 18-year-old Gerry, younger brother of Karen and Kevin and son of Patricia Honeyman and Seamus Quinn, swam from Lane 1 in the second semi-final of this event on Saturday afternoon.

He was well in contention at the 50m turn and was lying in third place, however, he ultimately finished in 6th place in a time of 1:50.94.

This left Gerry in 10th place overall among the 16 semi-finalists and saw him miss out narrowly on a place in the final by 0.49 of a second.

Gerry was also an integral member of Ireland’s mixed medley relay, who on Saturday morning, sliced almost 10 seconds off the previous Irish Senior record in a fantastic swim to progress to the final in third place behind Russia (3:54.16) and Germany (3:55.33).

Conor Ferguson led off on the Backstroke to give Ireland the lead after the first 100 metres. Mona McSharry was next up in the Breaststroke and kept a comfortable lead for Ireland. Emma Reid took over on the Butterfly leg before Gerry took over to bring the team home in 3:55.65, taking 9 seconds off the previous record held by Ferguson, Niamh Coyne, Ellen Walshe and Robbie Powell of 4:04.44 set at the European Youth Olympic Games in 2015.

In the final, and swimming from Lane 3, the Irish team finished 6th in a time of 3:54.09 which was just 3.34 seconds behind the gold medal winning Italian quartet. That impressive finish set a new Irish senior record and it was also 1.56 seconds faster than their semi-final time of 3:55.65.

Head coach Brian Sweeney said, “Overall this team has had a great week. There have been some great podium performances and some incredible racing. These athletes work hard every day in their clubs and with their coaches and that is the key to this improvement. Swim Ireland National squads have afforded these athletes opportunities over the last 5/6 years to develop their skills and these performances and growing confidence in their racing is a representation of the support and opportunities they’ve been given.”

“There’s a lot more to do and these young athletes will move forward with many others, with the continued support of their clubs, coaches, families and the Swim Ireland Performance programme. Thanks to Peter Banks for  his work over the last number of years.”

Next for this group of swimmers will be the Irish Age Group Championships and Summer Open in the National Aquatic Centre, Dublin from July 20 – 24.

See www.longfordleader.ie and the Longford Leader Facebook page for more