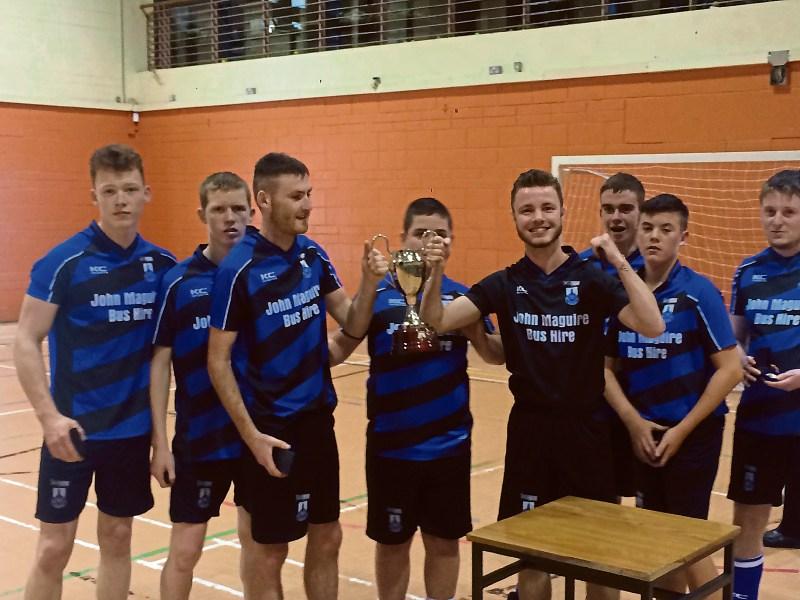 Longford Youthreach are celebrating their status as All-Ireland Indoor 5-a-side football champions, after many years of effort and heartache, including a loss on penalties  in the final two years ago.

All 110 Youthreach Centres nationally are invited to enter their Regional competitions with the eventual winners of each Region meeting in the All-Ireland Finals. AIT hosted the event which saw  Ashbourne, Ennis, Longford, Ballinrobe (last year's winners) and Sportsreach Dún Laoghaire  battle it out for the trophy.

All teams played each other in a winner takes all format. Longford beat Ennis 4-1, Ballinrobe 2-1, drew with a very well-coached Sportsreach 3-3 and ended with a 3-0 defeat of Ashbourne. Anything other than 3 points from this game would have seen Ballinrobe retain their title, but once Tony McDonnell found the net in the sixth minute there was no looking back and Longford added a further 2 goals from Martin Doyle and captain Michael McDonagh. Great scenes of jubilation followed the final whistle.

Michael McDonagh and Martin Doyle scored 4 each of the 12 goal total, followed by Richie Doyle on 3 and Tony McDonnell with his all important one. Noel Ward was outstanding in goals and Corey Leonard and John Joe Nevin (playing in his second final) completed the squad, contributing massively to the team's success.

Chad Reilly was a non playing substitute due to his up-coming Mixed Martial Arts commitments, but he was integral to our success at Regional level, where his very fine footballing ability helped win that Tournament.

In another success for the team, Captain Michael McDonagh has been chosen from an initial trial group of approximately 260 players to represent Ireland in a World Cup Indoor 5-a-side Tournament, organised annually to highlight the issue of homelessness worldwide.

The tournament kicked off last Sunday, July 10 in Glasgow and saw Ireland placed in Group D along with Bulgaria, Lithuania, Sweden, USA and Greece.

Michael, who lives in Farnagh, has attended Youthreach for the past two years, and has successfully completed QQI Level 3 and QQI Level 4 Major Award Courses.