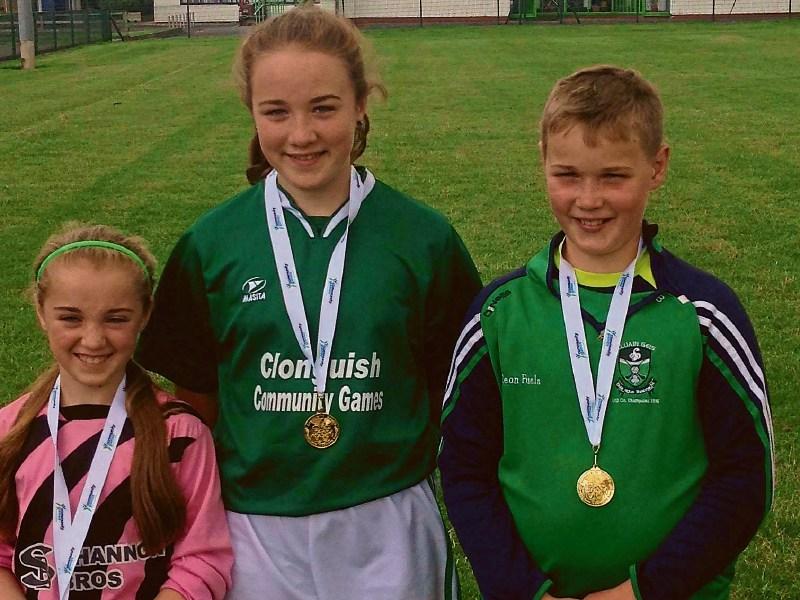 Three talented Longford siblings beat off stiff competition recently to each secure a gold medal at the Community Games Leinster Final in Carlow.

Kamille, Johnathan and Hannah Burke, the children of Gerry and Denise, Clonrallagh, helped make the competition a memorable one for Clonguish.

13-year-old Kamille, who is also on the Clonguish U14 relay team for  the nationals, secured gold alongside her team mates in a hard fought U14 tag rugby competition.

Having just finished her first year in Meán Scoil Mhuire, the eldest of the family is no stranger to sporting success, having no fewer than 58 medals in various sporting disciplines  to her name.

Indeed, Kamille plays U14 for Clonguish and for the county, who secured a Leinster title last year.

“He's big into his gaelic, he's very good,” Gerry continued, laughing that his son was forced  to give up hurling as soccer and football were taking up most of his time.

Johnathan, who will be going into sixth class in Newtownforbes NS in September, plays for the Clonguish U11 and U12 teams.

Last, but certainly not least is eight-year-old Hannah, who has followed in her siblings' footsteps, playing football and soccer  for the past number of years.

“She's loving it,” Gerry beamed, “She loves her soccer!”

The Newtownforbes NS pupil is a member of the U10 girls indoor soccer team and will also progress  to the  National Finals in Athlone in August.

It comes as no surprise that they  are passionate about sport, as Gerry coaches the U14 Clonguish team alongside Mick Glennon and played schools football, while Denise plays basketball. There are also lots of footballers on both sides of the families.

“They're all looking forward to the final now,” Gerry admitted. “They're talking about it all the time.”

Praising Clonguish and their teams, Gerry added; “We're very, very proud to have three medals in the house.”