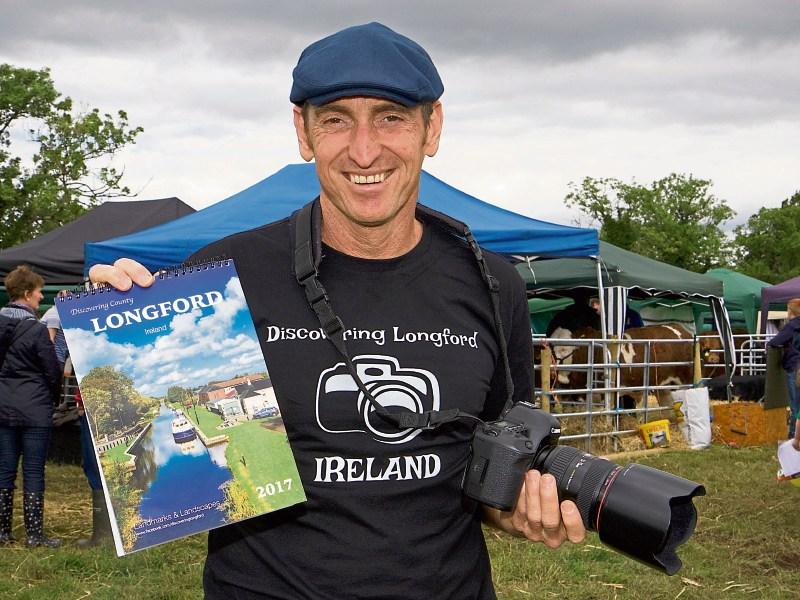 John Riddle is a man who knows all about Longford’s tourism potential.

A native of Brisbane in the northeastern state of Queensland, the father of one is the founder behind an online website and Facebook page aimed at unearthing Longford’s ‘hidden gems’ on camera.

Aptly entitled ‘Discovering Longford’ his two twinned approach is something he has remained firmly committed to for well over a decade.

This week, the affable Aussie popped in for a quick chat as he also took time to launch his 2017 Discovering Longford calendar.

“I just love getting out and photographing as many places as possible when we come home,” he said.

His use of the term ‘we’ brings the conversation to the real reason behind his ever deepening association with Longford.

Married to Ballymore GP Marie Higgins, the pair met while John worked as a driver  during their time spent working for an after hours doctor’s service company.

Now based along the sun baked Sunshine Coast north of Brisbane, the couple return home to Longford every year accompanied by their five-year-old daughter Aoife.

“We first came back to Longford in 2005 to meet Marie’s family,” added John, prompting nine consequent visits in the interim.

A keen photographer for many years, John’s ability behind the camera is probably best illustrated by the hundreds of photographs that are dotted across his own website and    Facebook page .

His latest offering of visual excellence, illustrated in his recently launched calendar is a publication you would more commonly associate with those who rely upon photography to make ends meet.

“I should have gotten into it (photography) a bit younger, but I was travelling a lot you see,” John admitted.

“I did get a bit more serious about it just before my daughter was born six years ago but when Aoife came along my time as you can imagine was taken up quite a bit.”

John, however, is not one for making excuses. And despite an attempt to relocate back home in 2014, he still manages to juggle home life and that of his favoured pastime with consummate ease.

The launch of his Facebook page the year previously and his own website has even managed to bring in a few additional euros to the Riddle household.

“Yeah, things have been going pretty well,” he smiled.

“I have sold a few photos to Longford County Council for the county development plan and I have had a few orders of prints from the website from people in Europe.”

To read this story in full, see this week’s Longford Leader.