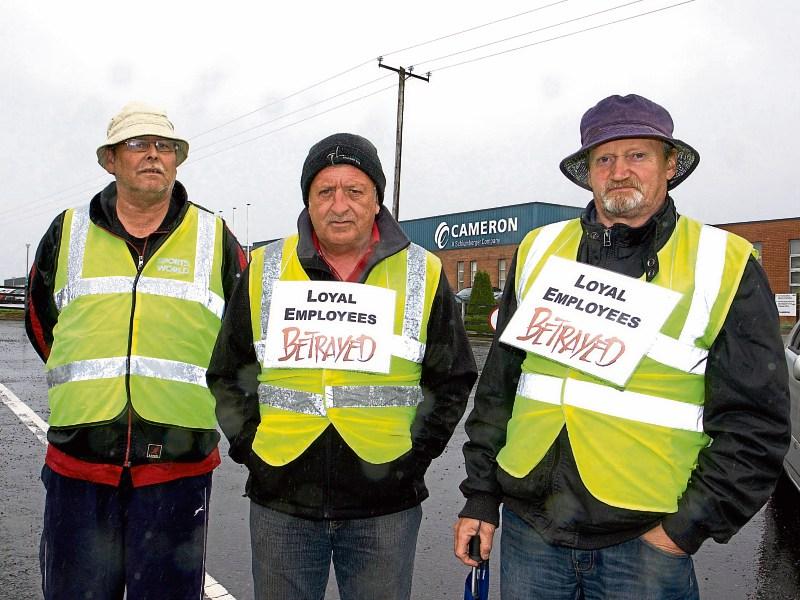 The ongoing dispute at Longford manufacturer Cameron cranked up a notch last week as staff served notice of their plans to commence industrial action in two weeks time.

Union officials from Unite, the trade union representing workers at the Aughafad plant, said the action will involve four weekend stoppages to overtime starting on July 15.

“A notice of industrial action will be served on the company today (Thursday),” said regional officer Willie Quigley.

“There will be a ban on overtime as that is a big thing in terms of running the show there.”

The move comes almost two months after seven employees were compulsorily laid off, bringing the total number of redundancies at the company to 45.

That prompted a Labour Court ruling, in May, to afford affected employees two weeks pay per year of service alongside their statutory entitlement.

However, the company has so far failed to meet the terms of that recommendation, leading to an escalation in tensions between management and staff.

“We actually thought the employer had got off lightly but they haven’t cooperated,” added Mr Quigley.

As the prospect of industrial action intensifies, a row involving the staging of an unofficial protest by former workers outside its gates has also escalated.

The company has so far stayed silent on the topic but there are  claims that those taking part in the protest have received   letters from both the company and a  Dublin based law firm.

Former employee Alo Kelly was one of four people taking part in what he termed an “assembly”  last Friday.

“I don’t know of any other situation where workers turned up outside a factory and within four days they had letters got threatening them with the High Court,” he said.

Having served the firm for the past for almost 37 years, Mr Kelly applauded the decision of his former colleagues to proceed with industrial action.

“We are grateful and we do feel they are taking a stand in their own interests because if we are treated like this how can the union negotiate anything else in there and go to the Labour Court when they can just turn around and say it doesn’t suit me I am not going to abide by it.”

Seamus Clarke, who was one of six workers given  compulsory redundancy, said  threats of legal action would not deter the group in their efforts.

“All we are looking to do is for the company to abide by the rule that the Labour Court made,” he said.

“We are here for the long haul,” he concluded.