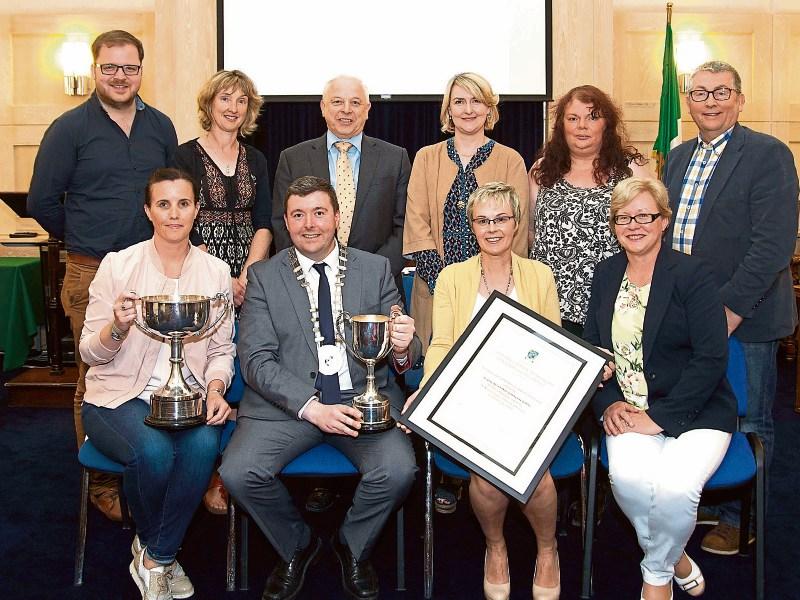 Pointing out that his experience as Cathaoirleach had been a humbling and educational one, Cllr Warnock was quick to compliment the groups and individuals gathered.

“There are a lot of bad things, there’s no doubt about it, we cannot hide that, but that is totally, totally put to bed by the amount of positive activity that’s going on around the county,” Cllr Warnock told the crowded council chamber. “And the people sitting in this room looking up at me crowing away now are the embodiment of that positivity.”

Ballymahon/Forgney Community Games, the recipients of the 2015 Community Games Cup and the Leinster Cup, were the first to receive their award, with Cllr Warnock lauding their work in promoting positive health,

Committee Chairperson Shirley Maloney gratefully accepted the award and paid tribute to those who keep the group running.

“It’s down to our hard-working volunteers and the children, the participants, and all the hard work they put into it as well.”

Brendan Doyle was the second recipient on the night and although well known for his sporting prowess, it was for his selfless work in the community that he was praised, having set up the Royal Canal Run.

“I love what I do,” admitted Brendan, who later honoured his late mother with his award. “I’m very lucky to have a family that are so involved in sport because it’s all they see me doing as well and they’re very much behind me on everything I do.”

The Edgeworthstown Development Association, who were presented with a top prize at the Pride of Place awards last year, were again honoured in the Council Chamber, with Matt Farrell accepting the award on behalf of the group.

Thanking the council as well as the Association's committee, Matt alluded to some of the great strides forward that Edgeworthstown has taken over the past few years. He emphasised that they were still facing many challenges, but facing them head-on together with a host of vibrant local groups.

Siobhan Leijen was the next to accept an award on behalf of counselling and psychotherapy support service, Good2Talk.

Since it opened on April 10, 2015, Good2Talk has helped more than 152 clients and have provided the equivalent of 57 working weeks of therapy.

“I just want to say very briefly that I accept this award on the back of all the many volunteers who have worked so closely with Good2Talk over the last 14/15 months,” Siobhan smiled. “We couldn’t have opened the centre without these volunteers.”

Though he couldn’t attend the event due to prior band commitments, 17-year-old Kian Johnston and the other members of Kildare-based band Dissension Rising were the next honourees.

While on tour in America, Kian and his bandmates were staying at a friend’s house in Atlanta City when they were awoken by the smell of smoke. They sprung into action, and succeeded in getting everyone safely out of the house.

Accepting the award, Kian’s aunt Trisha Hughes said; “He’d like to say what an honour it is to receive this award. As he said on Shannonside he thought it was just a small act of human instinct to - just when he smelled the smoke - wake up the lads, full stop. And he didn’t realise until he got home the severity of the thing.”

“I’d like to thank the Cathaoirleach and the County Council for nominating us and for bringing further awareness of the great things that the centre does in the community,” Bernadine continued.

Admitting that the centre has been hit by several financial cuts, she added that she was looking forward to continued support from the council, before congratulating the other five award recipients.

“I’d like to wish you all success in future and keep up the good work and thank you for your time.”