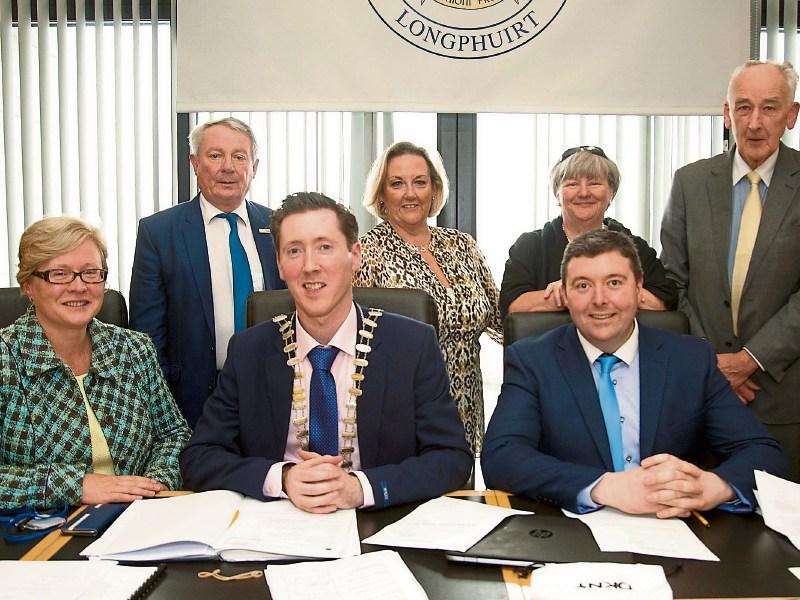 “I do believe if we can work together we can make progress,” he told last week's meeting.

“Budgets and finances are more important than ever and we must be conscious of ensuring we get value for money.

“We, as elected members, have a responsibility to the people who put us there in the first place.

Cllr Loughrey, who assumed the chain of office from outgoing Cathaoirleach Cllr Seamus Butler, was joined by his wife Natasha and two children Kayla (3) and nine-month-old Logan.

As he took his place at the Municipal District’s top table, Cllr Loughrey admitted the occasion was one of immense personal pride to him and his family.

“I am honoured and privileged to be in this position,” he said, as he gazed down at the chain showing the many names of his predecessors.

“I know I have big shoes to fill and though this is my second term (as a councillor) it’s my first piece of jewellery and the first piece is always the sweetest.”

Outgoing Cathaoirleach Cllr Seamus Butler said he had every faith in handing over the chain to a man he believed had all the attributes and personal qualities to take Longford forward.

He said looking back on his 12 month reign, plenty of positives were achieved, most notably the decision by the Council to take in charge the Flancare link road on the outskirts of town.

Paying tribute to the role played by Cllr Mae Sexton in bringing those efforts to pass, Cllr Butler said: “I think that will prove to be one of the most decisive things this Municipal District has ever done.”

Independent Councillor Gerry Warnock, who was elected as Leas Cathaoirleach, was just as wholesome in his praise for the new Cathaoirleach.

“Padraig will bring a wealth of experience, who, as a businessman in the town, always has his finger on the pulse,” he said.