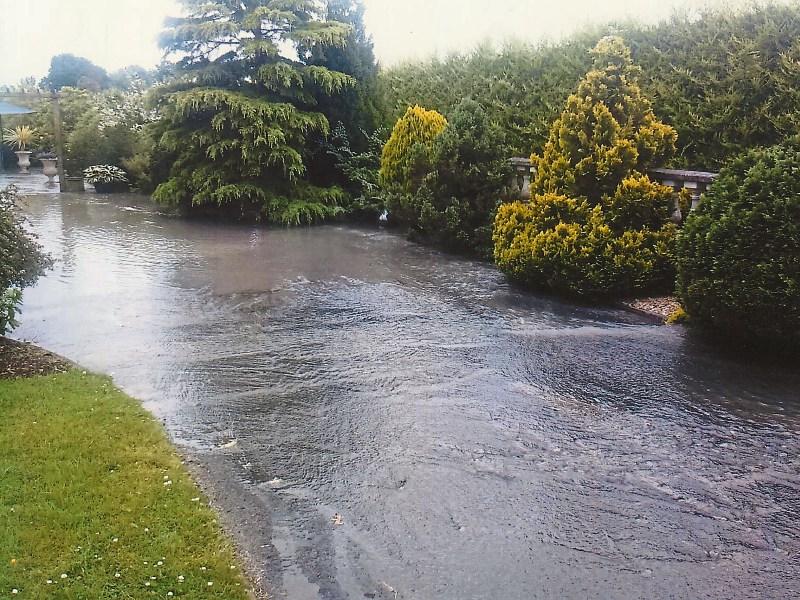 Irish Water has apologised after a mains pipe burst in Killoe at the weekend caused significant damage, with flood waters gathering around a local house.

Local man John Keogh told the Longford Leader that he was facing a clean-up bill of several thousand euro after the water mains burst outside his property twice inside the space of 24 hours.

“Four times my property has been flooded by a mains water pipe bursting outside my house,” he said.

Last weekend’s episode however was by far the worst, leaving John’s entire front concourse under water.

“With the last flood a slatted shed has been flooded, a septic tank overflowed and manholes and gullies were left blocked,” he said.

“The wall at the front of the house is cracked due to the force of the water. It’s totally unacceptable.”

In a statement, a spokesperson for Irish Water apologised to local residents affected by the weekend fallout and insisted the public utility was doing all it could to resolve the problem.

“Repair crews were immediately on site on Friday and Saturday repairing the bursts as they occurred,” said the spokesperson.

“Due to the fragile condition and age of the water main it is prone to frequent bursts.

“Irish Water is committed to ensuring that customers in the area have a more reliable and secure supply and have approved the replacement of 1.3km section of the water main.

Local Councillor Micheál Carrigy called on Irish Water to expedite its plans to carry out restorative works which had originally been earmarked during the last three months of 2016.

“This line needs to be replaced straight away,” he told the Leader, as he questioned how much had been spent on carrying out remedial works as a direct result of persistent water bursts.

“There are a number of issues that will have to be addressed, not alone the damage to property but also there is a concern to motorists who use the road.”

Meanwhile Irish Water outlined its plans to spend €900,000 on repairs in Killoe and Edgeworthstown.