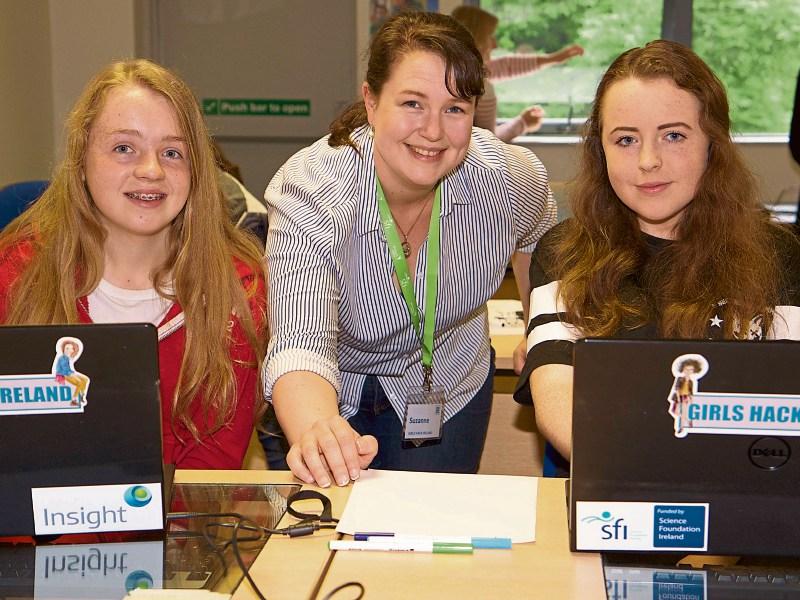 Computer programming was the name of the game at the Longford Local Enterprise Office on Saturday, as Girls Hack Ireland rolled into town for the second of their three sessions this year.

Giving an insight into the beginnings of the initiative, Programme Co-ordinator Ruth Kenealy explained that working in a research centre which focuses on data analytics, it’s obvious that there aren’t many girls getting involved in science technology.

“There are more coming through which is really exciting but we want more of them,” she continued.

So far, with just a year under their belts, including  sessions in Dublin, Wexford, Longford and Roscommon, Girls Hack Ireland is managing to do just that.

When the Leader called in to the session on Saturday afternoon, Lauren and Zoe Guinane and Olivia Hoysted were chatting with Ruth about school and the projects they had completed earlier that morning.

“There was a poster in school so I saw that and my Career Guidance teacher advised me to go to it and see what subjects I wanted to do for the Leaving Cert and it looked fun,” Lauren explained, when asked why she had attended the event. “I’ve enjoyed it today, it’s good. We used Scratch and we were making this guy walk around the screen.”

There to support Lauren in deciding on her subject choices, Zoe admitted that she had never been interested in the area of computers before but was eager to return for the next session.

It was also Olivia’s first time to attend an event like Girls Hack Ireland and she came along on her parents’ advice.

“It looked cool so I thought I’d go. I was working on Scratch and the Kinect. It was fun, I think I’ll come back,” Olivia told the Leader.