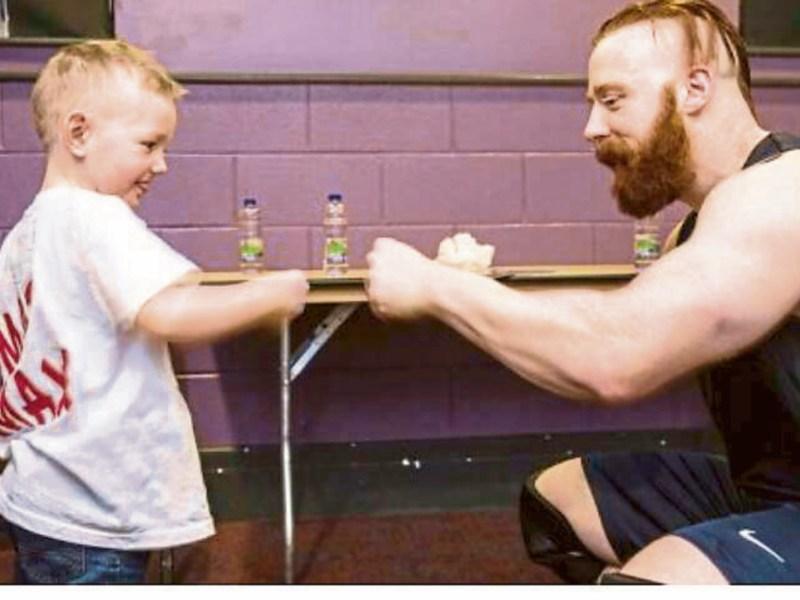 One of Longford’s strongest little fighters is on the hunt for some fighters of his own as he battles cancer for a second time.

Little Max Wenman, the son of Cathy Bermingham and Roy Wenman, was taken into the county’s and indeed the nation’s heart in 2012 at the age of two when he was diagnosed with stage four neuroblastoma.

Just under three years ago, the family got the life-changing news that Max was cancer free but earlier this year, he sadly suffered a relapse.

It was discovered that Max has a tumour on his femur.  Max was completing his fifth and final session of  chemotherapy for a few weeks when Cathy spoke to the Leader last week.

Max  also suffered a little fall at school and broke his leg, and is now in a cast from the stomach down to his ankle on one side.

Max, who turns six later this month, is a huge wrestling fan, and to help him keep bravely fighting, Cathy appealed to people to sell any wrestling memorabilia that their children had outgrown. The response was instant and unexpected, with donations of toys pouring in.

“If it keeps his spirits up during this whole thing, that will be all that matters,” Cathy smiled.

The wrestling community have even got behind the young warrior, with Aoibheann’s Pink Tie and Make-A-Wish arranging for Max to meet his favourite wrestler, Sheamus when Max’s dad Roy surprised him with tickets to a WWE event in Dublin. Furthermore, Low Blows wrestling  party company have turned their event at the Woolshed Baa and Grill in Dublin on June 19 into a #MemorabiliaForMax collection.

“People have never forgotten what he went through,” a grateful Cathy added. “The people of Longford and Ireland have always been good to us.”