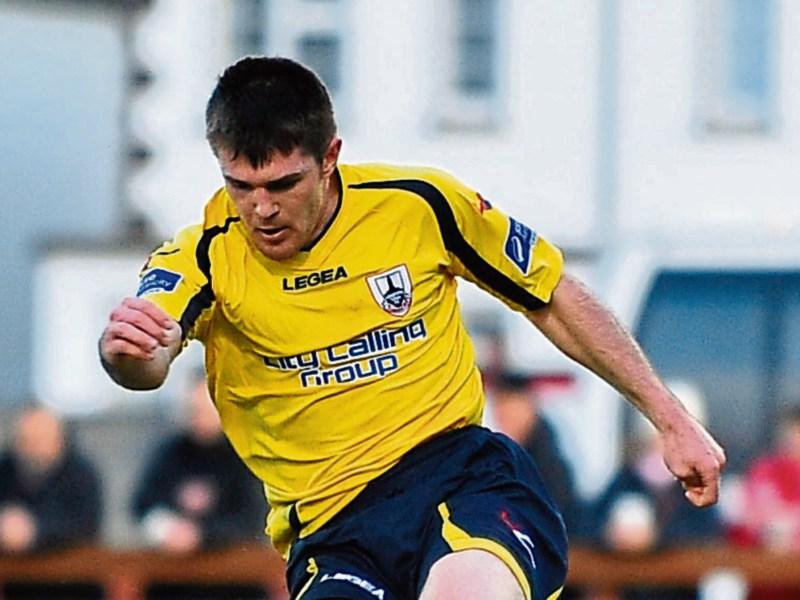 The only positive to come out of this game at the Carlisle grounds on Friday night last was that Longford Town didn’t lose and kept a clean sheet in the process of picking up a point from the bottom of the table Premier Division clash against Bray Wanderers.

For the majority of the game the Town were second best and the home side will rue several missed opportunities in the eventual draw. And for the second week in a row Longford finished with 10 men after Jamie Mulhall received a second yellow card in the 59th minute.

Speaking to the Leader after the game, Town manager Tony Cousins had no complaint about the sending off: “I have no problem with the sending off; it is different this week. If you are on a yellow card you can’t make that mistake. He dived in on the man and it was a sending off.”

It’s nearing the halfway stage of the season and things are looking precarious for the Town. They haven’t won a game in the league since the opening fixture away to Wexford Youths and are clearly in serious relegation trouble.

They are also struggling to get goals. On Friday night they posed few problems for the Bray keeper Peter Cherrie who only had to make one decent save of note and that came in the 76th minute when he denied David O’Sullivan.

Another worrying thing for the Town supporters is the attitude of some players who appear to be lacking the fight in the fierce battle to avoid the dreaded drop back down into the First Division.

Despite not creating too many chances and starting with five at the back, Cousins said his side came to Bray looking for the win.

“Obviously we came here to win. I felt we played okay in the first half; could have passed the ball a little bit better than we did but when we did pass it we created good chances. The Rhys Gorman chance at the back post was the best opportunity in the first half. You need that to go in. It was a tight game and you felt the first goal was going to be massive.”

Bray had the first decent effort on goal in the 9th minute when Ger Pender found Dylan Connolly but he curled his shot over the bar. Town’s best chance in the first half came in the 18th minute when Kevin O’Connor’s corner was met by Rhys Gorman but he was denied by Cherrie and Bray were able to clear the danger.

Andrew Lewis forced Town keeper Paul Skinner into making a smart save in the 26th minute while down the other end O’Sullivan had a shot cleared off the line. Bray created a number of chances near the break with Skinner saving from Connolly in the 39th minute.

And the Town shotstopper parried Connolly’s strike in the 42nd minute with defender Pat Flynn putting the ball out for a corner.

Longford started the second half brightly but didn’t create anything to trouble Bray. Then in the 59th minute they were reduced to 10 men when Jamie Mulhall was booked again and sent-off for another tackle on Connolly to make it extremely difficult for the visitors.

But the Town had a great chance to break the deadlock in the 76th minute when David O’Sullivan brought a fine save out of Bray keeper Cherrie after being played in by Kevin O’Connor.

Cousins said: “It was a great effort by David. Even with 10 men we created a couple of chances. The longer games go on, particularly with the heat, the games do get stretched. We didn’t get that opportunity when we went down to 10. I thought the players were magnificent to get a result in the finish and they put a massive effort in.”

With numerical advantage Bray pressed for a winner but couldn’t find a way past Paul Skinner. The Town had a chance near the end but Josh O’Hanlon really should have done better with his attempt to snatch a dramatic late goal.

There is now a three week break for the Euro Championship and Cousins is hoping for a change of fortune when they return to action on Saturday June 25th at home against Finn Harps.

“It was important the way the game panned out that we weren’t beaten by Bray. Noel Haverty isn’t too far off a return while we might look at the July transfer window and try to bring in one or two new players. We have got to win games but at least we are giving ourselves a chance in the relegation battle.”