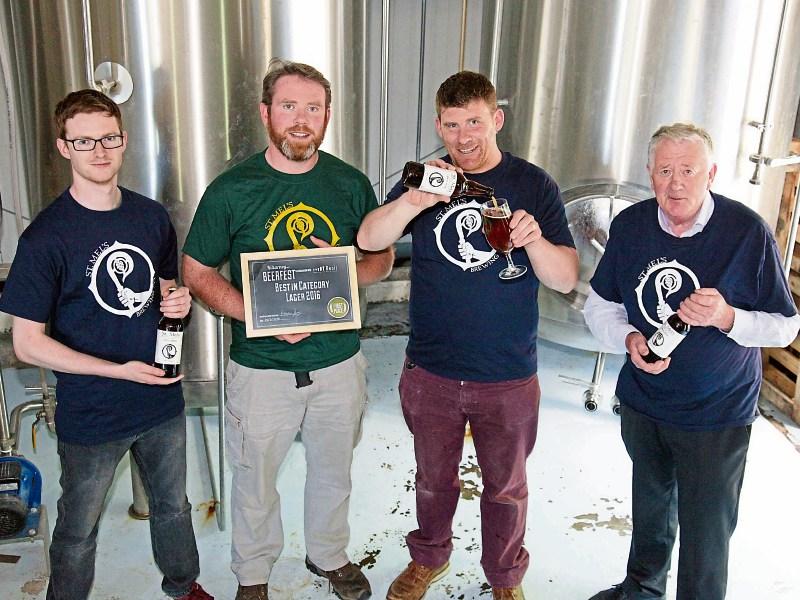 Though it is just two years old, St Mel’s Brewing Company is making an impression all over Ireland, particularly in Kerry, where the brewery recently scooped a top prize at the Killarney Beerfest.

Having come second in the Dark Ale category at the annual Beer Awards last year with their Brown Ale, the local business was delighted to take home gold this year with their Springbock in the Lager category.

Run by local men Liam Hanlon (a well known master brewer) and Eoin Tynan, the company has enjoyed great success since it was established in 2014.

One of its unique selling points, other than their popular craft beers, is that it remains at its heart a local business. Liam, Eoin and Eamonn all hail from the area and they also make use of local ingredients where possible, including elderflowers grown by David and Martina Burns.

“We’ve a great working relationship with the Burns,” Eamonn explained, before adding that that positive relationship extended to other craft brewers in Ireland.

Thanking all their loyal customers and the Local Enterprise Office for their support, Eamonn added that the company are now operating at full capacity at their premises at the Longford Community Enterprise Centre on the Ballinalee Road, and as such are looking into their options for the future.

From developing recipes at Eamonn’s own small brew house, to gold-medal winners looking towards further expansion, it’s been a whirlwind two years, but things show no signs of slowing down with the St Mel’s Brewing Company continuing to grow to meet customers’ demands.

However, regardless of their success, their local roots will remain of utmost importance, as Eamonn laughed; “We’ll sell it nationally and keep it local!”